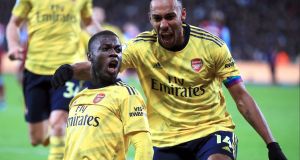 Rarely can one small step in the right direction have felt so satisfying. At half-time the grim post-mortems were being prepared. Arsenal had been booed off by supporters who were starting to wonder if their team were sliding into a relegation battle and at that stage, with West Ham dominant, it was hard to see a way back.

Not so fast, though. Everything changed in the space of nine sensational second-half minutes. Arsenal took their inspiration from an 18-year-old rookie, levelling through Gabriel Martinelli, and that was the cue for Nicolas Pépé to demonstrate why he is worth £72m, conjuring a goal of the highest quality. Freddie Ljungberg’s players had shown their mettle and the interim coach had his first victory since stepping in for Unai Emery.

Ljungberg’s selection had the feel of a manager aiming to correct the assumption that he is no more than a supply teacher. He made big calls, dropping Alexandre Lacazette and picking Calum Chambers over David Luiz in central defence, and Arsenal’s starting XI had the look of a power play from the Swede, a message to his underperforming players that he would not tolerate a repeat of Thursday’s abysmal performance against Brighton & Hove Albion.

It was a risky move from Ljungberg and Arsenal, who had to draft in Ainsley Maitland-Niles at right-back after Héctor Bellerín suffered an injury during the warm-up, were there for the taking. Their attempts to play out from the back lacked conviction and there was a timidity about their passing, even though Mesut Özil had freedom to roam in his free role. West Ham sensed vulnerability and the hosts should have taken an early lead when Declan Rice muscled Özil off the ball and combined with Felipe Anderson to free Michail Antonio, who shanked his effort over Bernd Leno’s goal from a promising position.

West Ham, tidy on the ball and aggressive when they were hunting it down, did not have to push hard to pierce a rearguard which was further weakened when Kieran Tierney went off with a shoulder injury. They were dangerous whenever Antonio, who tested Leno with a low drive at the end of a powerful run, was bullying the Arsenal back four with his power and it did not come as a shock when they went in front after 38 minutes. Arsenal failed to clear a set piece properly, Pablo Fornals dinked in a cross from the right and Angelo Ogbonna, more assertive than anyone in a yellow shirt, arrived unchallenged to head past Leno with the aid of a deflection off the unfortunate Maitland-Niles.

Arsenal could not complain, even though VAR checked to see if Ogbonna had handled. The visitors had offered next to nothing, aside from the moment when Pierre-Emerick Aubameyang darted down the left and crossed for Özil to head over from six yards. Martinelli was struggling on his first Premier League start, Pépé was having a mediocre game on the right and Arsenal’s efforts in the first half were best summed up by Granit Xhaka attempting to lift the ball through to Aubameyang and scooping a dismal pass to Ogbonna instead.

Ljungberg’s side were booed off by their supporters at half-time. It is never a good sign when the away support grows mutinous and it was less than encouraging when Sokratis Papastathopoulos, attempting to bring the ball out of defence at the start of the second half, ran down a blind alley before knocking the ball out for a throw.

West Ham ought to have doubled their lead when Xhaka gifted possession to Robert Snodgrass with an awful pass. Leno was grateful to see Snodgrass’s deflected shot spin wide and Xhaka, looking sheepishly at the floor, breathed a sigh of relief.

Yet West Ham paid the price for failing to keep their foot on Arsenal’s throat. Shortly after the hour Arsenal broke down the left and Sead Kolasinac, Tierney’s replacement, found too much to room to slip a low cross into the middle. Rice had fallen asleep and Martinelli, who has offered flashes of youthful promise during his outings in the Europa League and Carabao Cup, calmly sidefooted beyond David Martin.

Martinelli’s first goal at this level changed the game and Pépé grew in confidence once he realised that Arthur Masuaku is a much weaker left-back than Aaron Cresswell, who had gone off injured. After 66 minutes the Ivorian cut inside and bent a wonderful shot into the far corner with his left foot.

Arsenal, determined to win for the first time in 10 matches, were unrecognisable. Özil came alive, drifting into dangerous positions and finding Aubameyang in space. The forward shuffled the ball on to Pépé, who waited a moment before crossing. Played onside by Ryan Fredericks, Aubameyang beat Martin.

By the end it was West Ham, a point above the bottom three, who were feeling the heat. The spotlight had moved off Ljungberg and on to Pellegrini. - Guardian