FAI president Donal Conway to step down in January 2020 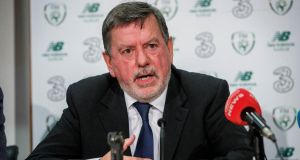 FAI president Donal Conway is to step down in January. Photograph: Ryan Byrne/Inpho

Donal Conway has confirmed he is to step down from his role as president of the FAI.

Conway has announced he will officially leave the position at an FAI EGM, which will be held on January 25th.

Conway will state his intention to resign at an FAI AGM which will be held on December 29th.

A statement from the FAI read: “In accordance with FAI Rules, where a casual vacancy arises, the Board shall seek nominations for the vacant position, on such terms and subject to such conditions as it may consider appropriate and shall call an EGM within 30 days of the vacancy occurring to elect a replacement officer for the balance of the term of office remaining.

“The Association shall seek nominations after the 29th December for the position of President of the FAI.

Minister for Sport Shane Ross welcomed Mr Conway’s departure saying it was a “long overdue exit from the FAI”.

“I have been seeking a complete departure of the old guard for many months,” he added.