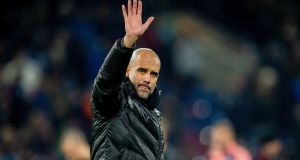 Pep Guardiola has admitted that Manchester City’s 11-point Premier League deficit to Liverpool is because the champions are missing something he cannot identify. The manager was asked whether being so far behind was solely because Liverpool have dropped only two points or whether there may have been a slight subconscious drop in performance after winning the title two years in a row.

“I would like to discover the reason for this big gap with Liverpool,” he said. “One is the quality of the opponent. I repeat, one lost game in almost 60, the numbers are incredible. I expected that [City’s performance level would dip] at the beginning of the season, after back-to-back titles.” He said the defeat at Norwich exemplified that but that he had since been satisfied with performances.

“So something has happened. I tried to discover. Sometimes it’s human; we can do better. We try to improve the next game. For example, in the last game [at Burnley], we scored an incredible four goals. But sometimes we miss goals from one metre and in the last game we shot in the corner from Gabriel [Jesus], two from out of the box from Riyad [Mahrez] and Rodri, and so sometimes it’s difficult to find an explanation. But that’s the truth – we’re 11 points behind. There’s something we missed and, honestly, I don’t know.”

Guardiola endorsed Mikel Arteta to be his successor. His assistant is of interest to Arsenal and Everton, and Guardiola was asked whether Arteta could take over at City. “He is able to do that,” he told Sky Sports. “But it depends on him, the club – many things that I cannot decide.”

Raheem Sterling has admitted he was not always “100 per cent committed” to strive for excellence.

The forward has been arguably City’s best player this season, which follows last term’s excellent campaign.

“You see the improvements on the pitch and so that’s why you continue to do it. Because you see how you feel on the field. You look at what your numbers are doing. It’s a good thing and as a professional you have to learn, take it in your stride and keep learning. That’s all I do.” – Guardian