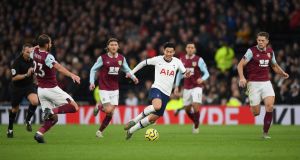 Burnley have confirmed that a 13-year-old supporter was ejected from the Tottenham Hotspur Stadium following an alleged racist gesture towards Son Heung-min during a Premier League weekend blighted by a number of alleged racist and discriminatory incidents.

Burnley said in a statement that the alleged abuse by the supporter, who was accompanied by a guardian at Saturday’s game, is being investigated by the Metropolitan police, assisted by Lancashire police and the two clubs.

Burnley added that it will be contacting the teenager and his family with a view to an “enforced educational programme,” run in conjunction with football’s anti-discrimination campaign Kick It Out and Burnley’s community programme. Kick It Out has been running programmes for some years aiming to help educate people who have committed acts of discrimination.

Greater Manchester police said on Sunday that they had arrested a 41-year old-man shown on televised coverage of the Manchester derby in a City fans’ section at the Etihad Stadium directing alleged racist abuse at United’s Brazilian midfielder Fred. The player said on Sunday that the incident demonstrated that we are living in a “backward society”.

On Monday, Brighton announced that two Wolves supporters had been arrested on suspicion of homophobic abuse during Sunday’s 2-2 draw between the two clubs at the Amex stadium.

“On a day when the club and Premier League celebrated equality and diversity, by supporting Stonewall’s ‘Rainbow Laces’ campaign, it is with regret that we report the ejection and arrest of two away supporters,” the club said in its statement.

Two men aged 46 and 48 were ejected from the away section, and later arrested outside the ground by Sussex police, before being released pending investigation, the club said.

A year ago Brighton issued a stern statement reporting that over the previous season and a half, the number of incidents they classed as hate crimes was already more than double the total for the three seasons before that. Paul Barber, the club’s chief executive, said of the latest incident: “Once again, it’s very hard to comprehend why some individuals think it’s acceptable to behave in this way, but we are very clear that neither Brighton & Hove Albion, nor the wider football community, will tolerate homophobia or discrimination at any time, in any form.”

Everton also announced that they are investigating reports of homophobic chanting at Goodison Park aimed at Chelsea supporters, saying that “a thorough investigation will include liaison with Merseyside police”.

On Sky’s TV coverage of the Manchester derby, the former United captain Gary Neville said racism in football and British society is being fuelled by Boris Johnson’s negative rhetoric on immigration. Piara Powar, executive director of the Fare network of European football anti-racism organisations, said she agrees with that, and warned: “It reaches a point where there is only so much you can do with anti-racism education, if racism and discrimination are being encouraged in a country’s general environment.” – Guardian