Derry win ugly in Drogheda to advance in FAI Cup

With extra-time looming, Derry City had their subs to thank for two late goals 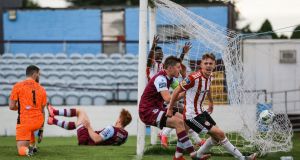 Tim Clancy’s First Division team had fashioned the better chances at United Park, especially Brandon Bermingham’s gilt-edged opportunity on the hour mark, but they were caught off-guard in allowing Harkin ghost in to grab the opener with a minute remaining.

In their pursuit of a last-ditch equaliser, their defence was once again opened up three minutes into extra-time when Mallon was left alone to beat Ross Treacy with a rising shot.

After Tuesday’s 3-2 defeat in the Europa League against Lithuanians FK Riteriai, Derry didn’t want to endure another spell of extra-time but they looked laboured from the outset against Clancy’s promotion chasers.

Mark Doyle almost punished them for failing to clear a free-kick on 14 minutes, only to stab his volley wide with goalkeeper Peter Cherrie beaten.

Conor Kane also went close after a driving run from his own half while Clancy was on his feet pleading for a penalty when Hugh Douglas was sent crashing inside the box.

Despite all that early pressure though and Drogheda could still have gone in trailing at the break. Cameron McJannet, the former Stoke City centre-back, should have marked his debut with a goal on 37 minutes but managed to head over from inside the six-yard box after Adam Hammill’s corner found him unmarked.

Shortly after the break, striker Ibrahim Meite missed another decent opportunity for the Candystripes by curling wide but Drogheda remained dangerous too.

Douglas angled his header a yard wide before Bermingham came even closer when the ball fell kindly into his path from Doyle’s dribble. The striker’s side-footer had Cherrie beaten but couldn’t stay inside the post.

With extra-time looming, Derry struck twice in quick succession and they had their subs to thank. Colm Horgan dashed to the right end-line to cross for the onrushing Harkin to slam the ball inside the near post.

Declan Devine’s side then made sure of their place in next week’s quarter-final draw when Meite’s slide-rule pass released Mallon, whose first-time shot from the edge of the box carried the power and accuracy to deceive Treacy.

“Winning ugly is something we hadn’t done enough of this year, so I’m very happy to do it after Drogheda really put it up to us,” reflected Derry boss Declan Devine afterwards.

1 Gordon D’Arcy: If South Africa moves up north, it could all go south
2 Charlesland Golf Club set to close permanently in December
3 South African franchises could join Pro16 by next March
4 Davy Fitzgerald has issues with GAA’s plans for League final
5 When Down’s 1960 All-Ireland victory brought down barriers
Real news has value SUBSCRIBE
Crossword Get access to over 6,000 interactive crosswords