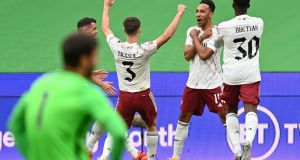 Pierre-Emerick Aubameyang fired Arsenal to their second Wembley triumph of the month as Mikel Arteta’s side overcame a wasteful Liverpool team on penalties to lift the Community Shield.

August started with the Gabon forward inspiring the Gunners to a record 14th FA Cup win and ended with him wrapping up a morale-boosting win in the 2020-21 season curtain-raiser.

Aubameyang saw his fine curling effort cancelled out by Liverpool substitute Takumi Minamino as the match finished 1-1, but the Arsenal captain would seal another triumph by scoring the winning penalty in the subsequent shoot-out.

Rhian Brewster missed the only spot-kick as the Gunners won 5-4 on an afternoon that only underlined the need to get their star turn’s new deal over the line.

Aubameyang gave Arteta’s men the lead by ending a fine team move in style and celebrating with the ‘Wakanda forever’ salute in tribute to Chadwick Boseman following the death of the Black Panther actor.

Arsenal dug deep after the early opener but their resolve was broken in the 72nd minute when Minamino slotted home his first goal for the club.

The match went to penalties and Arsenal’s players added their second trophy under Arteta, with Aubameyang coolly sealing the success from the spot.

After the match Gunners boss Arteta said the club were “close” to a contract extension for Aubameyang. He said on BT Sport: “Big games, big moments, big players. He is responding really well to that kind of pressure. “He was magnificent in the FA Cup final and again today.” On the contract negotiations, Arteta added: “We are close.”

Reds boss Jurgen Klopp added: “For these type of games you need the final punch. We created enough, had the ball quite a lot, but had to be careful of their counter-attack, deserved the equaliser, could have scored more, but when you don’t you have to take it.

“A penalty shoot-out is always a little bit of a lottery and we were unlucky there, so congratulations to Arsenal, that is how it is. We respect the competition.”