There were 2,524 at the Amex Stadium for pre-season friendly against Chelsea 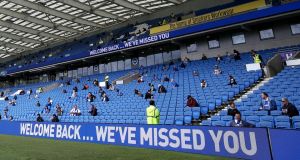 Fans return as part of a pilot event during the pre-season friendly between Brighton & Hove Albion and Chelsea at Amex Stadium. Photograph: Getty Images

Brighton welcomed fans back at the Amex Stadium for Saturday’s friendly against Chelsea, which ended in a 1-1 draw.

The Premier League club admitted 2,524 supporters, with strict social distancing measures in place around the ground and for seating in the sparsely populated stands.

The pre-season game was part of a number of pilot events announced by the UK’s department for digital, culture, media and sport for a phased return of spectators following the ban on mass gatherings introduced in March due to the coronavirus outbreak.

There were plenty of hand sanitisation points on the approaches to the ground, while face coverings were also required for fans — many sporting the Seagulls’ blue and white colours — while they were queueing to get in, although not while seated.

A digital match ticket was scanned for entry into the stadium, with cashless transactions at kiosks and there was signage reminding fans of the need to regularly wash hands.

When the action got under way, Chelsea — who have a number of players in quarantine after returning from their summer break and are following government guidelines on self-isolation — took an early lead after just four minutes.

Morocco international Hakim Ziyech, one of several new recruits, crossed for Callum Hudson-Odoi to knock the ball down and summer arrival Timo Werner slotted home. Ziyech, a summer transfer from Ajax, was later substituted due to a knee injury.

Brighton had a chance to equalise five minutes into the second half after Lewis Dunk was pulled down by Antonio Rudiger to concede a penalty. Blues goalkeeper Willy Caballero, who replaced Kepa Arrizabalaga at half-time, saved Neal Maupay’s spot-kick.

During the closing stages, Seagulls stand-in keeper Christian Walton had to be taken off on a stretcher with what appeared to be a serious ankle injury after falling following a corner.

Brighton secured a draw in stoppage time however when Irish international Aaron Connolly was fouled by Ethan Ampadu and Pascal Gross converted the penalty.

The Seagulls are set to host Chelsea again in their opening Premier League match on September 14th, which is currently scheduled to be played behind closed doors.

Brighton boss Graham Potter hopes more fans will get the chance to see the team in action again soon.

“I thought it was a fantastic day — a small step to getting back to normal as soon as we can safely do so,” Potter told the club’s official website.

“It was so nice to see fans here because as we know it brings a completely different dynamic to the stadium and I thought they made a lot of noise and really got involved in the game. Hopefully they enjoyed the performance as well.

“I think people at the club deserve a lot of credit for the work that has gone in and hopefully it was the first successful step to a return to normal at some stage in the future.”