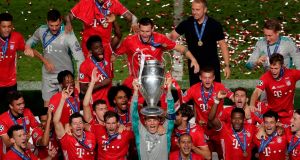 When Kingsley Coman stole into space at the far post, he knew that the right ball from Joshua Kimmich could give him the opportunity he had dreamed of.

The Champions League final had been tight and tense, with a few chances for either team but, until this point, no clinical edge. That was about to change. Kimmich’s cross was perfect and Coman’s eyes lit up. There was a time when his ambition had been to win Europe’s elite competition with Paris Saint-Germain, his hometown club and the one where he began his career as a trainee.

But here, he wore the red of Bayern Munich and, when he directed the header past Keylor Navas, he had put them on their way to a sixth triumph in this tournament. It was a triumph that they just about deserved and represented a fairytale finale to Hansi Flick’s first season in charge.

His record is simply breathtaking. It was a first ever appearance for PSG in this showpiece and they might have driven a different ending. They shaded the first-half, when they created good openings, and they were still fighting in stoppage-time at the end, when Neymar almost forced an equaliser. His tears at full-time spoke of heartbreak. It had been difficult to imagine a higher pedigree final, certainly in terms of the form that each club brought to the Estadio da Luz.

Bayern kicked off with 32 wins and one defeat in 35 matches in all competitions under Hansi Flick, who was appointed in early November while for PSG, in the same timeframe, it was 28 wins and one loss in 32 games.

Bayern were always going to hold a high defensive line, to set a fast tempo and try to assert themselves in the PSG half. And, equally, the French champions were always going to try to get their pacey forwards in behind the Bayern backline. The spaces that Bayern give up are a consequence of their attacking style and PSG exploited them.

They had a number of flickers during the first-half, with clear chances for Neymar, Angel Di Maria and Kylian Mbappe. Neymar’s opportunity followed a pass from Mbappe that left him with only Manuel Neuer to beat from an angle inside the left of the area - the goalkeeper blocked with his leg - while Di Maria’s opening came on 24 minutes, following a rapid thrust from halfway, led by Neymar.

After Di Maria exchanged passes with Ander Herrera, his drive was just too high. Mbappe’s effort was in the gilt-edged category. With PSG pressing high, David Alaba played a loose pass straight to Mbappe and when he got it back from Herrera, he had time and space eight yards out. He scuffed tamely at Neuer.

One of the many fascinating dynamics was Bayern’s rich experience of these type of occasions and PSG’s lack of it. Whereas the Germans were making an 11th appearance in the final of this tournament, PSG had previously appeared in just two European finals, each of them in the now defunct Cup Winners’ Cup. They beat Rapid Vienna in 1996 and lost to Barcelona in 1997.

PSG’s journey under Qatari Sports Investments has been well told and they were a Europa League club during the company’s first season at the helm - back in 2011-12 - when they could not escape a group that featured Athletic Bilbao, Red Bull Salzburg and Slovan Bratislava.

That felt as though from a different age, particularly when the star quality of their current line-up was factored in. The simmering tension was underscored by the presence of so many potential match-winners and for

Bayern, there was nobody more obvious than Robert Lewandowski. He had two first-half chances, the first after he took a lovely touch to kill a cross from Alphonso Davies. Spinning, he jabbed a low, bouncing shot against the post, with Keylor Navas beaten.

Lewandowski would work Navas with a header on 31 minutes and Bayern finished the half with Coman screaming for a penalty after he had outstripped Thilo Kehrer. There was contact from the PSG right-back but not enough to sway the referee, Daniele Orsato. Coman appeared to go to ground a little too easily but the replays did show that Kehrer had clipped his heel, as well as putting a hand on his shoulder.

The clip was difficult to see in real time and, in VAR terms, not in the clear and obvious bracket. The pre-match prediction had been for a high-scoring encounter but with the stakes so high, there were understandable nerves and, as the minutes ticked down, the realisation that one error could prove decisive.

The breakthrough, though, owed more to a burst of Bayern slickness. It was a wonderful team goal, with Joshua Kimmich central to its creation. He fired the move with a pass to Serge Gnabry, who played it inside to Thomas Muller and watched his teammate work it back to Kimmich on the right-hand side. The cross was deep and perfectly flighted and Coman was a snapshot in composure as he guided the header past Navas.

Bayern had PSG on the rocks and, more specifically, Coman had Kehrer where he wanted him and so it was a surprise when Flick took him off.

What did PSG have left? Di Maria played in Marquinhos, who was denied by another big Neuer block, and there was controversy when Kimmich appeared to catch Mbappe inside the area. No penalty, said Orsato. The glory belonged to Coman and Bayern. - Guardian