TV View: ‘If Tottenham turn this around I’ll think I’ve seen everything’ 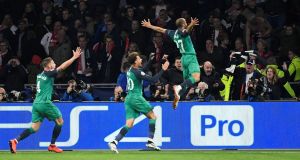 The morning after the night before and even the dawn chorus - infiltrated by liver birds, presumably - sounded like it was kicking off with a tune suspiciously similar to “when you walk through a storm . . . hold your head up hiiiiiiiigh”, guaranteeing a traumatising awakening for members of the ABLEC community (Anyone but Liverpool - even City) who had hoped it was all just a bad dream.

Mind you, that was nothing compared to what Barcelona awoke to, the Guardian’s Sid Lowe summarising the gist of the Spanish papers’ response to their Anfield efforts: ‘Shameful’, ‘pathetic’, ‘embarrassing’, ‘ridiculed’, ‘soulless’, ‘destroyed’, ‘nightmare’, ‘disgrace’, ‘the greatest humiliation in history’ and “it was as if the only thing in their heads was a monkey hitting a drum, like in the Simpsons”.

Apart from that, they thought the lads were unlucky and gave 110 per cent.

Come Wednesday, then, the burning question was along the lines of: how do Ajax and Spurs follow that? And you could only sense that it’d be kind of like being asked to go on stage at the Point in 1994 to perform the 1-2-3 (that you tried, but severely failed, to master back in your schooldays) directly after Riverdance. Sort of like ‘after the Lord Mayor’s show comes the shit-cart’.

But Rio Ferdinand was hopeful that not only could Spurs do the 1-2-3, they could find their inner Michael Flatley/Jean Butler and Riverdance all the way to Madrid for the final.

And what was his confidence based on?

The parallels between Spurs and Liverpool heading in to their second legs: ie they were both trailing and missing their best players.

It wasn’t the most encouraging of theories, to be honest, sort of like recalling that one lad escaped the guillotine back in the 1700s, although the other 326,271 had no such luck. And the sight of Harry Kane, in civilian clothes, taking his place in the stands only added to the Spurs faithful’s despondency.

But Gary Lineker persisted with the analogy. “Liverpool, 3-0 down, by contrast this should be an absolute doddle,” he said to Glenn Hoddle, which was poetry in itself.

Glenn wasn’t entirely convinced, and any way his thoughts were smothered by being present in the Johan Cruyff Arena, the memories rolling back, like the first time he saw the Cruyff Turn and nearly fell off his couch, running out to the garden in the dark to try and replicate it. Many of us tried to do the same and ended up in the back of an ambulance, Glenn, happily, avoiding that fate.

Time for a Des Kelly chat with Mauricio Pochettino who had fired up his lads midweek by declaring that he’d probably leave them if they won the Champions League. The BT panel thought this was a peculiar form of motivation, like if you escape the guillotine there’ll be a second one waiting for you. But come the fourth minute, when Matthijs de Ligt headed home, and the 35th, when Hakim Ziyech roofed his effort past Hugo Lloris, Spurs were laughin’, just the 3-0 down which, as we now know, is a simples Champions League deficit to recover from.

“Tottenham really do need some sort of footballing miracle,” said Gary. “I can’t remember the last time a team came back from 3-0 down on aggregate in a Champions League semi-final. Must be at least 24 hours ago. You never know.”

And then Fernando Llorente came on for Victor Wanyama, Gary beseeching the heavens that the fella would rip off his shirt to reveal the name of Divock Origi on his back.

“We’ve seen some crazy things in the Champions League this season,” he said, “but if Tottenham turn this around I’ll think I’ve seen everything.”

Something strange is happening, something weird is going on

Time fading away, though, posts hit, Jermaine Jenas shrieking, it’s not to be, Anfield was a one off, Champions League order restored.

And then Lucas Moura completed his hat-trick in the 96th minute and Pochettino falls to the ground, snogging the earth beneath him, the least Spursy moment in the history of the north London club.

A 1-2-3 like no other, Michael and Jean left purring, next time you’re three up in the Champions League semi-finals, be afraid.

“Something strange is happening,” said Jermaine, “something weird is going on.” We’re talking Twilight Zone stuff here, the madness of it all enough to make you hug the Champions League, the most cynical money-making machine in the history of the sport, like it was your curly-flame-headed niece attempting the 1-2-3.

“They are absolute ****ing monsters of mentality,” said Jurgen Klopp of his lads on Tuesday night. Pochettino, if he ever got his breath back, would have said the same of his boys,