Spurs pull off another great escape

Tottenham come back from three goals down on a famous night 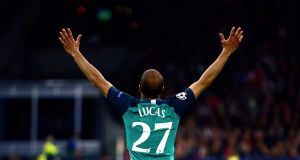 Lucas Moura celebrates after scoring his side’s second goal against.

When everything changed, there were suddenly seven, eight, maybe even nine Ajax players flat out on the pitch, their faces buried into the turf, not wanting to see any more. Somehow, Spurs had done it and in those moments we were reminded, once again, about the glories of this sport, about how brutal football can be and how, every once in a while, there is a story that can make your bones vibrate.

We have had two of them in quick succession bearing in mind Liverpool’s destruction of Barcelona the previous night. It will be an all-Premier League final in Madrid on June 1st and when Lucas Moura completed his hat-trick, five minutes into stoppage time, it was one of those rare occasions for every single member of the Spurs travelling party when it must have felt like the blood in their veins had been converted into the finest of red wine.

Suddenly, there were players, coaches, substitutes and various members of backroom staff running across the pitch in jagged diagonal lines to join in the scrum beneath the away end.

As etiquette goes, it was reminiscent of America’s Ryder Cup players trampling over the 17th green at Brookline in 1999. Yet, amid all the euphoria, perhaps the boys from White Hart Lane, as most of us would still rather call it, could be forgiven for overlooking that the game was still not, strictly speaking, over.

There was still a minute to play before everything was confirmed and the Spurs fans in that far corner could start trying to make sense of a baffling, beautiful victory, having seen their team come back from 2-0 down on the night and 3-0 on aggregate. Or, to put it another way, a place where there no longer seemed to be any lingering hope.

Until the ball came the way of Moura in stoppage time, it was shaping up to be a night of grievous disappointment for Mauricio Pochettino and his players. They had clawed their way back to 2-2 but Ajax were still ahead on aggregate and, with the clock ticking down, it had seemed as though the team wearing the Premier League’s badge would leave Amsterdam with so many what-ifs. What if Jan Vertonghen’s 87th-minute header had gone in rather than thudding off the crossbar? What if they had started better rather than letting Ajax build that first-half lead? What if Harry Kane had been fit, rather than watching the game in a coat, when the team needed one more goal to change everything?

But then the clock ticked into the 96th minute and suddenly the ball was on Moura’s left foot. Again, Dele Alli, who chose an ideal night to rediscover his best form, had set him up. It was their final chance of an epic, lyrical night. And the ball was with the right player. All night, Moura had given the impression he was utterly determined nobody would end up blaming it all on Kane’s absence.

Moura had already scored twice for Spurs in the second half and those goals, in the 55th and 59th minutes, changed the complexion of the evening. It was a brilliantly gutsy recovery and when Spurs needed a bit of luck they got that, too, in the form of Hakim Ziyech’s shot ricocheting off the post.

Pochettino had brought on Fernando Llorente to replace Victor Wanyama at the interval. Spurs had gambled and, for the first time, they started to pin back their opponents. Ajax were sitting on their lead and it was a mistake. It encouraged Spurs to pour forward. Moura put in his first goal, running through the middle to drill in a left-foot shot, and suddenly their hopes were invigorated.

The next one came four minutes later after André Onana, Ajax’s goalkeeper, had kept out Llorente’s effort from point-blank range. Moura was quickly on to the loose ball, eluding a couple of challenges, despite the close proximity of several defenders, and somehow finding a gap in which to fire the ball through a heavily congested six-yard area. More hope, again.

All of which felt markedly different to a first half in which Matthijs de Ligt headed in a corner after only four minutes and Ziyech lashed in a diagonal left-foot shot to make it 2-0 and leave Spurs contemplating an ordeal in the making. Time and again, the question has been asked about whether this team can go up to the next level. The evidence of that opening half suggested they had come up short again.

In those moments Ajax’s most boisterous supporters behind Onana’s goal, standing bare-chested behind their drums and their ‘F-Side‘ banners, could have been forgiven for wondering whether the strategically placed flags beneath the roof of the stadium, showing all the club’s trophies in order, year by year, might be getting a new addition.

David Neres had been injured during the warm-up, meaning a shift in personnel for Ajax in which Dusan Tadic took over on the left, Kasper Dolberg was promoted from the bench to lead the attack and Ziyech switched to the right. Tadic, in particular, was a dangerous opponent and Kieran Trippier had a hard time restraining him during that opening 45 minutes, in keeping with what has been a difficult season for one of the key players in England’s World Cup adventures.

Spurs had to improve and in fairness to Trippier, who had lost De Ligt for the first goal, he managed to shake the opening half out of his system. They all did. Llorente’s introduction gave the Ajax defenders a new problem. Spurs had Son Heung-min back from suspension and that gave the team even more energy in attack, especially taking into account the speed and directness of Moura. Danny Rose started to push forward more from his left-back spot. Christian Eriksen’s influence grew and, though there were still dangerous moments, that was always going to be the case.

Another team might have crumpled after the struggles of the first half. Maybe Spurs were emboldened by the memories of what they did to Manchester City in the quarter-finals. Perhaps they had seen the miracle of Liverpool knocking the crown off a Barcelona side that likes to see itself as football royalty.

Whatever the reasons – and, more than anything, it was competitive courage – Spurs are going to their first-ever European Cup final. There was even an encore, 45 minutes or so after the final whistle, as Pochettino and his players headed back out for a team photograph on the pitch. Moura had already taken the match-ball as a souvenir and, as he turned back to had to the tunnel, his teammates broke out in applause. One by one, all of them, clapping him as he went.