‘It wasn’t the best decision. In the end someone found out’ 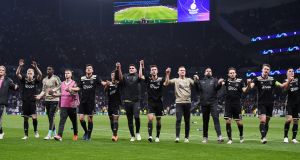 Van der Laan was rumbled when teammates spotted his face in live TV coverage of the match in London.

The Telstar striker Jordie van der Laan has been sacked by his club for calling in sick so that he could travel to London to watch Ajax play Tottenham Hotspur in the first leg of the Champions League semi-final.

Van der Laan was rumbled when teammates spotted his face in live TV coverage of the match, which Ajax won 1-0. “My team’s group-chat exploded. They fell about laughing,” Der Laan told the Dutch newspaper Volkskrant.

The 25-year-old was absent from work for four days in all and he told the BBC that attending the match was not his best career move. “I just called in sick and of course it wasn’t the best decision. In the end someone found out.”

Van der Laan, who has made only a handful of appearances for the second-tier side Telstar this season, told the Dutch newspaper Noordhollands Dagblad that he believed he was not in contention for the match against Young PSV and that coloured his thinking when deciding to throw a sickie. “I took into account that with Telstar we didn’t play for anything anymore and I, given the number of playing minutes I had previously, had a small chance of being picked - otherwise I would not have gone to London,” said Der Laan.

Der Laan now regrets the whole episode. “I hadn’t expected it would get so out of hand. I didn’t show up for training on Tuesday and it got noticed,” he told the broadcaster Omroep Brabant.

Telstar’s technical director, Piet Buter, said it was Der Laan’s dishonesty that had most angered them. “He cheated on us,” he told Noordhollands Dagblad. “In total he has not been to the club for four days. He reported in sick on Sunday. When we asked if he wanted to visit the club doctor, he said he already had an appointment with the doctor. A day later the excuse was that he was in bed with a fever. Only when our trainer suggested to visit him did he admit that he was in London.

“Now it looks like he’s the hero and we’re the fool, but we had reason enough to sack him. We wanted to handle this in a civilised way. That is why we separated with mutual consent.” Telstar say they will honour Van Der Laan’s termination package as long as the player makes it clear his departure was not the fault of the club.

As for Der Laan, with no attachment to a club, the ardent Ajax fan made an appeal for a spare ticket so that he could attend Wednesday’s return leg with Tottenham Hotspur. “Surely I deserve a ticket for Wednesday’s game now? After all, I am free,” he tweeted.

His plea was successful and he was offered a ticket in exchange for a round of drinks. - Guardian