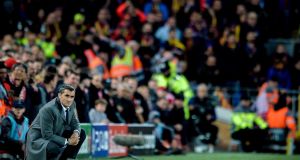 Liverpool’s fans chose to stay behind, Barcelona’s had no choice. Standing there in the Anfield Road End, still barely able to believe it, noise engulfing them, forced to hang around at someone else’s party. Trent Alexander-Arnold passed in front of them on a lap of honour. He applauded a little timidly, not sure if he was supposed to, but the Barcelona fans applauded back. They knew they had watched an extraordinary team play. It just wasn’t theirs.

So while Liverpool wondered if this was their greatest night, Barcelona wondered if it might have been their worst. They might not always have Rome, after all this eclipsed even that when Roma’s 3-0 win overturned a 4-1 first-leg semi-final lead. That it had happened again made it even harder to take, Ernesto Valverde said afterwards. It made it even more unforgivable, too: “Barcelona relive the nightmare of Rome,” ran the cover of La Vanguardia. Barcelona had just “written the blackest page in their history”, said Sport, so they did the same. The front page was all black. “The greatest humiliation in history,” the headline said in giant yellow letters.

El Mundo offered up some alternatives: Munich 2013, Turin 2017, Rome 2018, Liverpool 2019 - setbacks so recent as to invite profound reflection - while others looked further afield, to the 1986 European Cup final, when Barça lost on penalties to Steaua Bucharest, or to 1994, when Milan tore them to bits, the end of the Dream Team.

Most, though, kept returning to last year semi-final in Rome. That had hurt, Leo Messi admitted at the start of the season, which is why this Anfield humbling hurt even more. “This disgrace will go down in history,” wrote Lluis Mascaró in Sport. “Shame. There is no other adjective to describe this, the biggest failure in Barcelona’s history. It is far greater than last year in Rome - and that despite the fact that they’d had that lesson. Nothing this century has been worse than what they suffered last night, Not even 1986. Not Athens in 1994. Nothing.”

There were other adjectives: embarrassing, humiliating, ridiculous, unacceptable. Barcelona had been “torn to shreds”, “left in tatters”, “exposed”, “destroyed,” “ridiculed”. This was a “disaster”, a “debacle”, a “blow of gigantic proportions”. Barcelona were “soulless”. El País called it “a monumental failure”, adding: “Barcelona burn at Anfield.””Anfield flattens Barcelona,” ran the headline in AS. “Liverpool devoured them,” said La Vanguardia.

Valverde especially bore the brunt. “The Champions League is too big for him,” Ernest Folch said. “He has to go,” wrote David Sánchez in Marca. “Bye, Ernesto.” And please take Coutinho with you, a “ruin”. El Mundo Deportivo’s cartoon depicted a giant finger pointing at Valverde, “the man who took two Champions Leagues off Leo Messi”. After all, it was not just what happened, it was the way it happened, the sense that they did not only lose a match, they have long since lost their identity. That it had happened again. That’s what makes it so hard to take, Valverde admitted. It was also that everything had been in their favour.

The front cover of Marca summed it up: “With the 3-0 - with Liverpool’s stars injured - with the league won - with the lesson of Rome - with the final at the Wanda - with Madrid out - with the best player in the world - a historic failure. [And a 10 out of 10 for Liverpool and Anfield].”

“It was the magic of Anfield, of course,” wrote Juan Jiménez in AS, “but above all it was the inability of a team with no personality away from home, sunk, undone, incapable of doing anything except praying for time to pass. A team that didn’t even rebel. It seemed impossible to be worse than Turin, Paris, Rome, but they managed it.”

The fourth goal summed it up, a portrait of their failure. “The corner of shame,” El Mundo Deportivo called it.

“Barcelona were pathetic,” wrote the author Juan Cruz. “As if the only thing in their heads was a monkey hitting a drum, like in the Simpsons, possessed by ineptitude, shame marking every goal. A soulless team led by no one, full of doubts, stupid, sad, inexistent.” Joan Josep Pallas described them as being “as scared as a little lost boy on a beach looking for his mother, as defenceless as a featherweight facing Muhammed Ali’s fists, a rag doll in the hands of Liverpool, who were a gang of revolutionaries before the high bourgeoisie”. The article was entitled: “The End”. Which it was. For many of those players, for the manager, it really might be. - Guardian