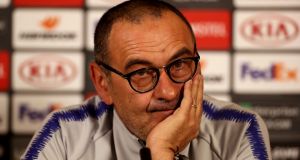 Maurizio Sarri: “We need to work. Probably we’d need something from the market. So it’s not easy because the level of the top two is very, very high.” Photograph: Mike Egerton/PA

Maurizio Sarri believes Chelsea’s ability to bridge the chasm to Manchester City and Liverpool at the top of the Premier League will hinge upon having a two-window transfer ban frozen or overturned after Fifa rejected their appeal against the sanction.

The club will take their case to the Court of Arbitration for Sport (Cas) in the hope of having the sanction reduced or overturned and will seek an interim ruling at Cas to have the ban frozen while the final appeal is heard. If that is granted they could be allowed to sign players this summer, with Sarri hopeful they would make the additions he considers crucial to reduce the gap, currently 24 points, to the summit.

“It would be very difficult to cover the gap at the moment,” said the head coach, whose team go into Thursday’s Europa League semi-final second leg with a slight advantage after last week’s 1-1 draw at Eintracht Frankfurt.

“We need to work. Probably we’d need something from the market. So it’s not easy because the level of the top two is very, very high. I don’t believe in buying 10 players. I think we’d have to buy only one or two players. Otherwise it’s very difficult to improve immediately. I think we are a very good team, and so we need only one or two players.”

Chelsea were found to have broken rules regarding their dealings with under-18 players from foreign countries over a number of years. They were charged with 92 breaches of article 19 alone – the most serious offence – and found guilty of 29 of those cases.

Fifa’s disciplinary committee handed down the two-window ban in February, with Chelsea immediately appealing to the governing body. It always felt that would be doomed to failure, and they would have a better chance of winning concessions at Cas.

Fifa did announce a small adjustment to the punishment. Chelsea’s ban will now not cover the registration of minors under the age of 16 who do not fall under the scope of article 19 – in other words, players from the United Kingdom.

Fifa’s basic rule is that clubs cannot bring in players under 18 from other countries unless their parents have emigrated for reasons not connected to football, or if both the player and club are based within 50km of a national border.

Under article 19, the only other exception is for transfers within either the European Union or European Economic Area where the player is aged between 16 and 18. A fine of 600,000 Swiss francs (£453,000) stands.

Chelsea have always said that the majority of the cases involved short-term trialists at their academy, who did not go on to sign. They argued there is no law against trying out under-18 international players, that it is common practice across Europe and, as such, they believed these cases ought not to have been included in the final judgment.

“The club is very disappointed that the transfer ban of two consecutive registration periods was not overturned,” Chelsea said in a statement. “Chelsea FC categorically refutes the findings of the Fifa appeal committee. It acted in accordance with the relevant regulations and will appeal the decision to the Court of Arbitration for Sport.”

The midfielder Ruben Loftus-Cheek, developed at the club’s academy, has suggested a transfer ban might offer opportunities to Chelsea’s young, homegrown talent and the large contingent of senior players currently on loan.

Loftus-Cheek is set to start against Eintracht, with N’Golo Kanté set to be out for at least a fortnight with a hamstring injury. The visitors conceded six times before half-time at Bayer Leverkusen on Sunday but welcome back their influential forward Ante Rebic from suspension.