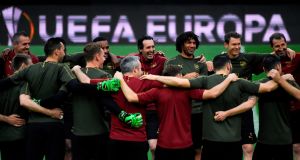 The Mestalla offers Arsenal a route towards the Champions League place they were unable to clinch via the Premier League but Unai Emery has said his players must look beyond that and be motivated more by the chance to secure the club’s third European trophy.

The Arsenal manager, who won this competition three times in a row at Sevilla, also insisted that the meeting with his former club Valencia is “my final” – a game he wished could have been left until Baku on May 29th.

A draw with Brighton left Arsenal needing a win, a Tottenham Hotspur defeat and an eight-goal swing on the final day to qualify for the Champions League via a top-four place, and Emery effectively admitted defeat on the prospect of doing so.

But while he said that the Europa League, in which Arsenal lead Valencia 3-1 after the semi-final first leg, represented a second chance he rejects the idea that this competition is primarily a gateway to the Champions League. He also insisted that the tie remained “50-50” and that Arsenal would seek to score, not just defend.

“We [have] finished in the Premier League and it is not a possibility for us now, but we are in this competition and we will see tomorrow. We want to play the Europa League because it is a title first and secondly because of the Champions League [place].”

“I first competed for this title here at Valencia when it was still the Uefa Cup and was a lesser title than I think it is now. It has grown. It’s an important title for all those teams not in the Champions League, one they all want to win.

“Getting a Champions League place through the Europa League is a fair reward, I think. It’s an attractive title and it’s getting more attractive; we’ve seen Manchester United, Atlético, Sevilla against Liverpool. The demands are high and everyone wants it, as a title, not just a way in [to the Champions League].

“At any club like Arsenal or Valencia, titles have to be objectives [in themselves]. Arsenal only have two European titles in their history: the Fairs Cup [in 1970] and the Cup Winners’ Cup [in 1994], neither of which exist any more, so I have a lot of ambition to win a title.”

1 Dustin Johnson leads US PGA after Saturday charge
2 Rory McIlroy puts integrity ahead of glory in US PGA second round
3 Lionel Messi waves his magic wand again to guide Barça past Napoli
4 Sporting Cathedrals: Semple Stadium, the very centre of the hurling universe
5 Bayern Munich complete formalities with rout over Chelsea
Real news has value SUBSCRIBE
Crossword Get access to over 6,000 interactive crosswords