In ground used to famous occasions, this comeback topped the lot 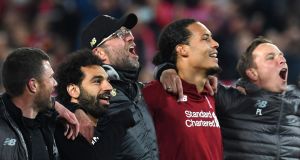 Jurgen Klopp and his players celebrate a famous night at Anfield after the victory over Barcelona. Photograph: Paul Ellis/AFP

There’s so much from Tuesday night at Anfield that will live long in the memory, but one thing I will never forget was the sight of lots of Liverpool fans staying on in the stadium long after the players had left the pitch, not making any noise, just sitting there quietly, as if they were trying to come to terms with what they had just witnessed. Asking themselves, ‘did that really happen?’

I was asking myself the same thing.

Later outside the ground I saw some Barcelona fans waiting for their team bus, ready to give them what for. Because for them, for everyone, what had happened just beggared belief.

“Look, this really is impossible,” Jürgen Klopp had told his players in a meeting before the game, “but when I look around the room, I think, hold on a minute . . . it might just be possible.”

I don’t know if he actually believed that, I certainly didn’t. Not least because Liverpool were without two thirds of their attack. And, most likely, having to keep a Barcelona attack made up of the genius that is Lionel Messi, Luis Suarez and Philippe Coutinho scoreless. If you’d presented that script, the story ending with Liverpool winning 4-0 and going through to the final . . . no chance.

In the end it was fantasy football.

Anfield has had many magical nights down through the years, but for me this one topped them all. I would even put it ahead of Istanbul, and I genuinely never imagined anything bettering that.

All through those 94 minutes the players knew that however immense the effort they put in, it would all count for nothing if Barcelona got even one goal. And Barcelona expected to score. There was a little bit of arrogance about that, but if you’ve got Messi in your team, you’re probably entitled to assume the goal will come.

And even though Liverpool got that early goal, it was 47 minutes before they scored the second, with plenty of good Barcelona chances in between. So I still didn’t see it coming. And by then Liverpool were often going two on two at the back, both full-backs pushing up, a gamble they had to take.

Once Georginio Wijnaldum had scored those two quick goals, for Barcelona it had become like trying to turn a tanker around. And they just couldn’t do it. You could see the frustration on their faces, Suarez getting more and more angry by the minute, he and Messi looking utterly bewildered when Origi got the fourth.

I know when we talk about European nights at Anfield it riles other supporters, they believe they can create an atmosphere just like it. But it’s different at Anfield. It IS different. You have to experience it. There’s just something about those people and that ground on European nights, they applaud everything, every tackle made, every throw-in won, roars come from nowhere, they just ratchet up the atmosphere, the intensity, it becomes electric. And that gets to the opposition. It got to Barcelona. The 12th man had a major, major influence on that game. I have never experienced an atmosphere like it.

Maybe Klopp sowed the seed when he told his players ‘it might just be possible’. And that’s the thing with Jurgen Klopp, he gets everything out his players, literally everything, and he makes every one of them better.

Sometimes the most important people at a club are the players who don’t play regularly, because they’re the ones who can cause you problems. But Klopp does not allow that to happen. He takes no shit. He’s all the players’ friend, but he’s not their best friend. That’s the difference. He loses it on occasion too, and that keeps them on their toes.

You cannot have performances like Tuesday night’s without all the players being in it together. You can see the camaraderie, and while those who aren’t playing might be miffed, you can see how pleased they are for the ones who do. That’s why that sense of team is so massive in the club. And that’s what Klopp has helped create.

I see him in action behind the scenes sometimes and he treats everyone the same, whether it’s Mo Salah or a groundsman. As far as he’s concerned everyone there is part of the club. LFC TV have an office at the training ground and he goes in there sometimes looking for a cigarette. He’ll knock on the door, if he sees someone who he’s never met before he introduces himself, ‘Hi, I’m Jurgen, who are you?’ ‘Are you new to the club?’ ‘What’s your job?’ All that. He’s just one of those guys who gets it.

He is creating something very special at Liverpool, and on Tuesday night he and his players created a night like no other.

Fantasy football on a fantasy night.