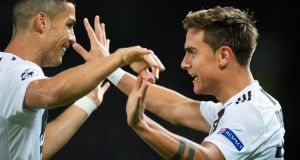 There’d been much talk of late of Jose Mourinho losing the dressing room, so it didn’t augur well when he appeared to have literally done so ahead of the game against Juventus, the manager arriving at Old Trafford without a single player. Not even Chris Smalling.

“Eh, the team’s not here,” BT Sport’s Des Kelly pointed out to him, but Jose wasn’t unaware of the problem having left his squad on the bus. “They’ve been stuck in traffic for 45 minutes,” he explained. “I walk with a hoodie in the middle of the fans. Nobody recognised me.”

Gary Lineker could only giggle back in the studio, although Rio Ferdinand, Paul Scholes and Owen Hargreaves – BT again choosing a balanced panel for a United game – seemed less amused, even at the notion of those fans who claimed they’d spotted Jose en route to the ground being advised by their mates to cut down on the wacky baccy.

The squad had even stayed in the Hilton Garden hotel up the road because they’d been late for their previous Champions League meeting with Valencia, the club having its profit margins severely dented by a Uefa fine of €15,000. Scholesie proved there were no flies on him at all when he took the opportunity to suggest they should have chosen the even nearer-by Hotel Football. (Him being a part owner).

Rio, though, was just perplexed by it all. ‘We used to get a police escort,” he said.

“You used to win things,” Gary replied, which was quite rude.

Any way, the more positive news for United was that if the team ever made it to the ground it would be the same one that had beaten Chelsea 2-2 at Stamford Bridge on Saturday – if you don’t count Ross Barkley’s pesky intervention – the first time Jose hadn’t dropped someone since December of last year.

“They’ve arrived!” Gary’s relief was palpable, by then the suspicion being that the bus driver was an undercover City fan who’d suggested the quickest route to the ground was through the Wirral. So, there would indeed be a game, meaning we didn’t have to watch the Presidential debate, so lest ye ever doubted it, there is a God.

The Juventus line-up included one Cristiano Ronaldo. And RTÉ were gutsy enough not to ignore the rape allegations laid against him, some things are a bit bigger than football after all, Tony O’Donoghue detailing them in a report during their preview. Innocent ’til proven guilty was the reasonable consensus, but “a cloud will hang over him until this is resolved,” said Richie Sadlier.

Back on BT, Gary attempted to raise the issue but the lads weren’t all that interested, opting instead to salute Ronaldo for his ability to focus on his football even when off-the-field ‘distractions’ might be, well, distracting.

All concerned were probably quite relieved when they were allowed focus on football too, Didi Hamann and Liam Brady reckoning there was but a stay on the execution of Jose’s reign at United and that even if there had been a pick-up in their last couple of games, it would only be a matter of time before it went pear-shaped again.

And then Didi forecast that United would beat Juve 3-1.

Liam, not unfamiliar with the elderly lady, was having none of it. “It’ll likely be the other way,” he said, Richie agreeing. And Liam advised United to keep a close eye on Paulo Dybala, that his partnership with Ronaldo was rather good, and that he had a habit of drifting late in to the box to insert the ball in the net.

“He’s showing people he’s still got it, isn’t he,” said Martin Keown of Ronaldo, the 2016 and 2017 Ballon d’Or winner, like he thought he might have morphed in to Carlton Palmer once he departed the Premier League.

Half-time. Gary chose to be upbeat on behalf of United. “Juventus lead by only 1-0,” he said, like that was a good thing (which it was). Scholesie, meanwhile, had the look of a man who would have preferred to have been watching the presidential debate. “There is such a gulf in class . . . when you watch that you feel a little bit embarrassed.”

Second half. Such was the space afforded Juventus, it was a little like United were still on their bus, a befuddled Nemanja Matic, in particular, so lost at sea he must have been mighty close to calling the coastguard.

Full-time. “Men against boys, to be honest,” said Rio. “Sad thing,” added Scholesie, “there was an acceptance . . . from the players and the fans.”

If they were walking back to the Hilton Garden, you could only hope they had their hoodies up.