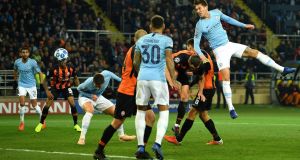 Kharkiv is an unlikely holiday destination but, as midnight approached here and the final whistle blew, Pep Guardiola bore the serene look of a man who had just spent a week unwinding at a tropical resort.

David Silva’s scoring volley and creation of a second goal for Aymeric Laporte not only greatly enhanced Manchester City’s chances of escaping a tight group and progressing to the knockout stages but de-stressed their noticeably edgy coach. By the time substitute Bernardo Silva made it three courtesy of his first touch – namely a 20-yard shot which went in off a post – Guardiola’s technical area prowling was no longer reminiscent of a cat on a hot tin roof.

Guardiola is Europe’s highest paid manager and has spent £500 million since taking charge of the world’s wealthiest club in 2016. It represents a compelling equation designed to choreograph Champions League glory – and, preferably, sooner rather than later.

Perhaps he has been feeling the pressure as, on the eve of this vital group game, Guardiola was in a strange mood. After initially appearing slightly bored and fidgety in front of the media City’s manager became suddenly animated as he suggested his team was still missing something “special” before berating fans for declining to fully buy into the European dream.

It seemed rather harsh on those 825 travelling supporters who had made the 1,650 mile journey from Manchester to eastern Ukraine; with some taking three separate flights to get here for a fixture which kicked off at 10pm local time.

That travelling band were appeased by the sight of Kevin de Bruyne starting a game for the first team since injuring his knee last summer and looking anything but ring rusty. Indeed the Belgian’s adhesive touch and elusive movement represented a principal reason why City dominated the early stages with John Stones initially barely tested in his ersatz right back role.

The on-going war in Donbass between Ukrainian armed forces and Russian backed separatists dictates that Paulo Fonseca’s Shakhtar are exiled to Kharkiv on match days. As the night time temperature plummeted, they received impressive highly charge support here but it could not really compensate for the absence of two key attacking midfielders in Taison and Marlos.

That duo are a big part of the Ukrainian Champions South American core and, without their promptings, the Brazilian striker Junior Moraes started slowly, offering few hints of the form which has latterly seen him score 10 goals in 12 League games and two more in Europe against Lyon.

Yet as the chill began biting, Shakhtar began warming up a little and Ismaily’s overlapping incursions from left back started troubling Stones a little. Ditto Fernando’s powers of left wing acceleration and quite startling change of pace. Yet such cameos remained relatively isolated; if a clever back-heel which might have created a goal reminded everyone of Moraes’s talent, Riyad Mahrez shot narrowly wide as City counterattacked following the resultant home corner.

Silva was settling into a familiarly glorious groove and, after connecting with Mahrez’s fine cross volleyed against an upright.

Warming to his theme, City’s captain for the night then went one better, lashing a supremely assured left foot volley beyond Pyatov after Jesus’s shot was deflected into his path. Tellingly Silva’s goal prefaced a slightly manic technical area celebration on Guardiola’s part; there was a definite sense of tension being relieved.

When Benjamin Mendy, influential at left back, saw a shot palmed away from a corner all that remained was for Silva to execute the set piece and an unmarked Laporte headed past Pyatov.

Shakhtar were clearly second best but, even though Ismaily did well to block a goalbound Silva shot, they still had their moments. How the Metalist Stadium cursed as Mykola Matviyenko headed fractionally wide and Fonseca saw a penalty appeal for a perceived foul on Viktor Kovalenko rejected. Admittedly Ederson was rarely called to arms but he reacted smartly to parry Ismaily’s shot while Moraes headed marginally off target.

Such scares were reduced to academic footnotes as Bernardo Silva replaced De Bruyne and instantly benefited from Jesus’s decoy run by shooting the third. A few days in Ukraine had left Guardiola with the contented glow of a man checking out of a health spa.