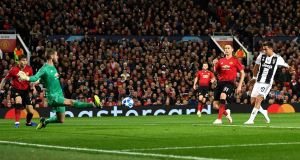 There was a time when Old Trafford would lap up these nights. Manchester United versus Juventus: it was an occasion, not just a football match. Except those were the days when the players in red could hold their own against even the most accomplished opponents. The days when it felt like anything was achievable and the European Cup felt like an obsession for the man staring out from the home dugout.

It feels very different now. This defeat was another demonstration of how far England’s biggest club have dropped away in the post-Ferguson years and, ultimately, the side now managed by José Mourinho came up so short it must have been a chastening experience for those supporters who remember better times.

The home team team did, in fairness, improve in the second half, emboldened by the kind of sporadic carelessness from their opponents that would have felt almost inconceivable during the long periods when Juventus spread their feathers, peacock-style, and assumed control due to a goal from Paulo Dybala, the game’s outstanding performer.

Paul Pogba struck a post and, by the end, United had enough of the ball in promising areas to cling to the belief that they might have saved themselves. Yet the story of this match was of one team that is very much a work in progress facing another set of players who give the impression they are completely in tune with one another. United survived a mauling from Cristiano Ronaldo – even if he did set up the game’s decisive moment – but it was a night that provided the compelling evidence that, for the modern United, it is a long way back.

They found out here why Juventus had begun the season with 10 successive victories. Massimiliano Allegri’s side arrived at Old Trafford with a four-point lead at the top of Serie A, on course to win their eighth Italian title in a row, and the seen-it-all-before expression that you might expect from a club that regards their record in the European Cup, as two-time winners yet seven-times beaten finalists, to be an affront.

The beauty of this team is that it has no apparent weaknesses. Two of those losing finals have come in the previous four seasons and, for long spells, this was a display that embraced all that rich experience and knowhow. They looked, in short, a cut above their opponents. And then, of course, they had a player wearing the No 7 shirt like a fashion statement, with a blur of orange in his boots and the look on his face, as always, that he fancied himself as the nearest thing in football to The Fonz.

On the previous occasion Ronaldo came back to Old Trafford it was with Real Madrid in 2013 and Alex Ferguson, always scheming, had the idea for the public announcer to change the order in which the players’ names were read out. Ronaldo was ushered in last, as “the magnificent number seven”, because Ferguson wanted to crank up the pressure on his former player just before kick-off. For a while, it looked like a brilliant ploy and Ronaldo did, indeed, struggle initially to cope. Until, that is, he scored the goal that knocked out United and signalled Ferguson’s final involvement in the Champions League.

This time, there were no special measures in place other than Ashley Young clipping his heels on the first occasion Ronaldo saw his marker coming and shaped to get away with the kind of drag-back that must have had nostalgic qualities inside this stadium. Ronaldo picked himself off the grass with a knowing smile and quickly set about making his presence felt again.

He started on the left but Ronaldo is always more effective when he has a licence to roam and, in the 18th minute, that took him to the opposite wing. His cross was aimed for Juan Cuadrado’s run towards the near post, with Chris Smalling in close proximity, but the ball ricocheted off the United player and fell invitingly for Dybala, with the pace now taken off the delivery. From six yards out, running on to the ball, there was no way a player of his talent was going to pass up that kind of opportunity.

For the home crowd, the rest of the first half must have been a difficult experience given that Juve will always be one of the clubs that United measure themselves against. The imbalance in talent must have been startling and, if anything, it was a surprise the Italian team did not add more goals.

David de Gea’s goalkeeping was the principal reason and the pattern of the game was so far away from how United would have wanted it that, in turn, spread unease. Passes went astray. Nemanja Matic aimed for Marcus Rashford on one occasion and put the ball straight out of play. At other times it was Pogba waving an apologetic hand. Pogba, a former Juve player, cannot have enjoyed his former club’s superiority.

De Gea’s finest save was surely the one to keep out Ronaldo’s rising shot eight minutes into the second half. He also denied the same player from a free-kick in the first half and, even better, palmed away the follow-up effort from Blaise Matuidi. Ronaldo might even have heard a few jeers when he took the ball and showed it to Young, daring him to make a tackle.

By the end, he will not have cared too greatly. - Guardian service