TV View: Crumbs of comfort hard to find from Leinster House to the Nou Camp 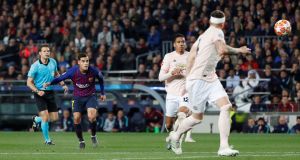 By the 20th minute Manchester United were in need of a comeback of Tiger-ish proportions after the Messi Man thrust a stake in to their Champions League semi-final-craving hearts with a quick-fire double, his goals ably assisted by Ashley Young and David de Gea when the fella really doesn’t need any assistance at all.

For fear, perhaps, that we’d switch over en masse to Juve v Ajax, or even Food Unwrapped on Channel 4 (“Jimmy discovers something unexpected in fish fingers!”), George Hamilton enticed us to stay tuned to the game by insisting there was “a crumb of comfort” for the United faithful: “If they were to score three without reply, they would go through.”

Somehow, Ronnie Whelan contained himself, opting for silence rather than an uproarious pfft, but you sensed he regarded that crumb as a morsel so teeny even a microscope would struggle to locate it.

With 50 per cent of United’s rear-guard consisting of Young and Phil Jones, Ronnie reckoned only Barca finding their inner Francesco Molinari – eg Messi dribbling past Pique and Ter Stegen and inserting the ball in his own net – would make a game of it, and so bored did he sound – and no one can sound bored-er than Ronnie – you half suspected his only interest an hour into the game was what unexpected thing Jimmy discovered in fish fingers.

But before we could turn our attention to matters in Spain it was time for an update from Tony O’Donoghue who was stationed outside Leinster House and talking about corporate governance and sections of the Companies Act 2014 being contravened (certainly sections 281 and 282, he’d still to get to 283 and beyond). Tony, you can only assume, never saw his football-reporting career coming to this.

“Who’s in charge of Irish football tonight,” Darragh Maloney asked him, but Tony had no clue, the safest guess probably the person who brandishes that ‘Davy Keogh Says Hello’ banner at our national team’s games.

Darragh attempted, rather heroically, to suggest that German corporate governance of their football is just as ropey, but Didi Hamann’s sympathetic grin implied that that was akin to likening chalk to Spundekas (as we know, a spiced cream cheese from the region of Northern Rhenish Hesse).

“The issues we have are relatively small compared to what the FAI are facing,” he said. “Our president, Reinhard Grindel, took on a watch as a birthday gift from the football president of Ukraine and never declared it.”

And he resigned as a result. For accepting a watch as a pressie. Liam Brady and Kevin Doyle’s heads nearly fell off their necks from the shaking. Darragh, meanwhile, surrendered, in the accountability stakes this wasn’t, after all, a like for like situation. If Reinhard had spent €500-plus on an executive dry-cleaning service he’d now be facing life without parole.

“What we have now is a cartel – it’s been shambolic,” said Liam, Darragh agreeing, even going there: “It’s our version of Brexit.”

Anyhow, back to the football.

Marcus Rashford threatened to take United back to the Promised Land (copyright: Clive Tyldesley, 1999) when he brushed the Nou Camp crossbar after 33 seconds, but if RTÉ or BT had prepared an end-of-game montage with a soundtrack along the lines of “Can Manchester United score? They always score” and “Solskjaer has won it!!!!!!”, they’d have felt much like Francesco Molinari come the end of the contest: all that effort for nuttin’.

To put the tin hat on it, Coutinho added a third, as if Liverpool fans hadn’t enough to be happy about.

Still, though, Messi’s pass to Coutinho . . . count your blessings that you’re alive in this time.

Ole, then, turned water into wine in the opening weeks of his reign, but now the wine has gone decidedly watery all over again, its alcohol volume in or around the 0.1 per cent mark. He’ll need a heap of trollies for his summer shopping.

Divil a crumb of comfort. And, worst of all, we’ll never know what unexpected thing Jimmy discovered in his fish fingers.