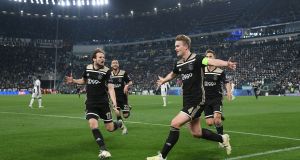 First Real Madrid, now Juventus. What a story this Champions League campaign is turning into for Ajax, who produced another remarkable performance to reach the semi-finals of the competition for the first time since 1997, courtesy of a goal scored by a player who was not even born when they met Juventus in that last-four tie 22 years ago.

Matthijs de Ligt, Ajax’s 19-year-old captain, ended Cristiano Ronaldo’s hopes of winning a fourth successive Champions League title and a first for Juventus with an imperious header that was no more than the visitors deserved. Ronaldo had earlier registered his 126th Champions League goal with a header of his own but little else went right for Juventus on a night that belonged to Ajax.

They played with freedom, belief and conviction, with their breathless brand of attacking football simply too much for Juventus. The outstanding Donny van de Beek brought parity shortly after Ronaldo scored and it is a measure of how well Ajax played in the second half in particular that it came as no surprise when De Ligt, another standout performer, headed home.

It had quickly became clear that this was going to be a game of fine margins. A cagey and scrappy opening eventually gave way to produce a goal for each side in the space of six first-half minutes, levelling the tie up on aggregate and leaving Juventus with little margin for error.

Both goals were awarded after VAR checks had taken place and the significance of Van de Beek’s equaliser for Ajax was lost on nobody in Juventus colours. They would need to score twice more if they conceded again.

Ronaldo’s goal was a trademark header just before the half-hour mark, with time appearing to stand still as he bent his run to meet Miralem Pjanic’s corner before calmly nodding the ball beyond André Onana, the Ajax goalkeeper. The Portuguese was totally unmarked and Joel Veltman, the Ajax right back, had tumbled to the ground just before Ronaldo made contact.

Replays showed, however, that Veltman was knocked to the ground by De Ligt and the goal was allowed to stand after referee Clement Turpin reviewed the incident.

The question was how Ajax would react. They had taken 20 minutes to put together a sustained spell of possession but were starting to grow in confidence just before Ronaldo’s goal. Van de Beek, running on to a loose ball after Dusan Tadic and David Neres linked up beautifully in the Juventus area, lifted a shot over from little more than six yards out. He would not be so forgiving with his next chance.

Hakim Ziyech’s wayward shot from distance arrived at the feet of the Ajax midfielder, who was about 12 yards out. Adjusting his feet quickly, Van de Beek took a touch before coolly dispatching a low effort beyond the reach of Wojciech Szczesny.

The first instinct was that Van de Beek must have been stood in an offside position because he had so much space around him, but the VAR check showed that the goalscorer was played onside by Federico Bernardeschi on the far side of the pitch. Now it was game on.

Massimiliano Allegri made a change at half-time, withdrawing Paulo Dybala, his captain, and replacing him with Moise Kean, but it was Ajax who looked far more menacing whenever they attacked.

Neres, so fluid with his movement, found Van de Beek, who shifted the ball on to Ziyech in space on the right. With only Szczesny to beat but the angle against him, Ziyech tried to steer his shot inside the near post but the goalkeeper stood tall and, to his credit, saved smartly with his left hand.

Anxiety started to grow among the Juventus fans as Ajax took control of the game. Van de Beek, who seemed to be finding pockets of space all the time, curled a splendid right-foot shot from 22 yards that was arcing towards the top corner until Szczesny flicked the ball over the bar.

Kean, running on to a pass from Ronaldo, then drilled wide at the other end but that was a rare chance for Juventus.

Only a last-ditch intervention from Pjanic prevented Ziyech from connecting with Tadic’s low centre, adding to the sense that an Ajax goal was coming.

So it proved as De Ligt, towering above Alex Sandro and Daniele Rugani, met Lasse Schone’s corner with a thumping header that gave Szczesny no chance. Neres, set up by Ziyech, could easily have added a third. – Guardian