Ronaldo and Marcelo give continental kings the advantage 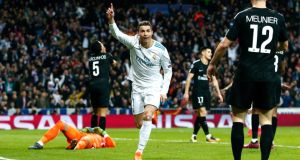 Unai Emery said the preparation for this game started at the Camp Nou last season, but he cannot have meant like this. It was not three goals in seven minutes and it is not decisive yet, but Paris Saint-Germain did concede twice in the last seven minutes to leave them facing another premature European exit. They will always have Paris but Marco Asensio came on to change everything, creating goals for Cristiano Ronaldo and Marcelo with the score at 1-1 and just as PSG seemed to have a degree of control.

With the inclusion of Isco, Zinedine Zidane sought to reinforce the midfield, prioritising control over the counter-attack. It also meant outnumbering PSG there, and applying pressure on Lo Celso, playing in the deep midfield role which is not really his in the absence of the injured Thiago Motta. Motta’s injury had been announced in advance and Madrid took advantage. Either side of him were Marco Verratti and Adrien Rabiot. The changes were at the back, where Presnel Kimpembe and Yuri Berichiche played ahead of Thiago Silva and Kurzawa.

Whenever Neymar, on the left, received the ball, he ran at Madrid. Five times he was down inside the first 15 minutes, as Madrid sought to play on the front foot.

Barely 90 seconds had gone when Toni Kroos appealed for a penalty and a couple of minutes after that Marcelo dashed into the area, the ball taken from his toe. And yet the threat was always there, first made apparent when Verratti’s ball found Neymar running into space and then again when Dani Alves’s speared delivery sought him a moment later. Next, he dashed into the area, continuing when he appeared to have the chance to pull the trigger and slipping when he finally tried to feed the ball to Kylian Mbappé.

Still Madrid targeted Lo Celso, who by half-time was booked and gave away a penalty. Before that he had gifted Madrid the clearest opportunity when Isco robbed him as he attempted a back-heel not far from his own area. The result was a close-range free-kick that Ronaldo hit over.

If clear chances did not arrive immediately, the sense of danger was clear at both ends. Neither team are built for self-protection. The breakthrough came when Mbappé dashed up the right. His ball into the area was let go by Edinson Cavani and then, with Nacho sliding in and maybe getting a touch, Neymar back-heeled it into the path of Rabiot, following up untracked from midfield to finish. Ronaldo struck over and momentarily Madrid were shaken. Neymar provided a clear opportunity for Cavani, whose deflected shot floated just over. But then Karim Benzema drew a superb save from Alphonse Areola and from the corner, taken short, Kroos headed into the area and tumbled again.

The decision was questionable but Ronaldo did not care, smashing the penalty into the net.

Three minutes into the second half, Lo Celso did find a way out from the back and PSG almost found the second. As he ran from deep, he spread the ball wide for Neymar on the left. Again, he came inside, swaying past challenges, and then curled the ball in to Mbappé. Ten yards out, he chose to control the ball; when he hit the shot, Navas was down fast to stop it. If it had worked that time, the next time Madrid threatened he it was who got caught. In the meantime, Dani Alves had built a move on the right, pulling the ball back from the by-line for Rabiot, whose shot hit Sergio Ramos’s arm.

PSG seemed more comfortable in possession now, Madrid a little more inclined to break, the roles reversed. One thing was for sure: this was open, anything felt possible. Down on the touchline, the men who could tip the balance waited.

The surprise was that when Unai Emery made his first change and took Cavani off, it was the full-back Thomas Meunier who came on. Gareth Bale followed soon after, replacing Benzema at centre-forward.

Meunier’s introduction prompted a tactical change, the consequence of which was to push Dani Alves forward and he went at Marcelo, whose energy levels were dropping, although he would still have just enough left to end this match and maybe even the tie.

The pitch had appeared to be tilting PSG’s way again. A scramble in the Madrid area had ended with Ramos throwing himself in to stop a shot that was heading towards goal. Then Neymar’s ball across the face of the goal just evaded Alves sliding in at the far post. But the space that left on the break suited Madrid too and it was not long before Zidane introduced even more pace, with Marco Asensio and Lucas Vázquez. There were four athletes up front now; the question was getting the ball to them and without the flag being raised. It did not take long.

Lucas almost found Bale with his first intervention, Areola out to block him from close range and then suddenly Asensio was sprinting into space on the other side. His first ball was cut out but PSG made a mess of the clearance and he got it back again. Areola could only push the next delivery into the path of Ronaldo who made it 2-1 with seven minutes left. Three minutes later, Asensio was running at them again. This time Marcelo joined him to finish the move and the match and go some way towards finishing the tie. It could have been different but, one on one, Mbappé ignored Alves and shot straight at Navas. Then Neymar guided the last kick of the game over the bar. “This is how Madrid win!” chanted the Bernabéu. It is how PSG lose, too.

1 O’Donoghue says Limerick will let their hurling talk in 2020
2 Welcome to Iten in Kenya – home of champions and cheats
3 Welcome to the Greenlandic championship: Soccer at the edge of the world
4 José Mourinho feels Troy Parrott isn’t ready to step up yet
5 Stuart McCloskey called into Ireland’s Six Nations squad
Real news has value SUBSCRIBE