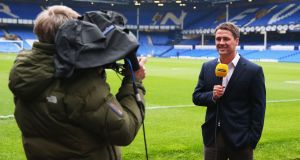 An assessment of the near-£4.5 billion (€5.064bn)committed to Premier League clubs for live UK televising of their matches from 2019-22 can be assisted by adaptating a famous old quip: reports of football’s bubble bursting are greatly exaggerated.

True, this £4.464bn to 20 football clubs, on which Sky and BT Sport will aim to make a profit by charging supporters subscriptions, is approximately £500m less than the record £5.1bn the two broadcasters paid last time for the 2016-19 rights. But it does not look like the beginning of the end for the money feast of clubs, their owners, managers, players and agents, which they have been served up for 25 years by making supporters pay to watch football on television.

The deals put the Premier League already at around 90 per cent of the current £5.1bn, with two remaining packages to be sold. These two are experimental, seemingly designed to attract an internet platform: all 10 matches on the fixture list can be broadcast simultaneously, four different times per season.

Talk of the bubble bursting overlooks that these concluded sales are only for UK broadcast. Overseas rights sales are still to be sealed, in a global village whose populations are engaging with ever-increasing interest in the English top flight’s spectacle of multinational stars. The Premier League has let it be known that it has already sold rights in China, the US, South Africa and Brazil, and expects international sales to more than cover the domestic gap. The rights in China are said to have been sold for $700m, 10 times the $70m received for the 2016-19 seasons.

Domestically, while the £4.464bn committed is a dip, that £5.1bn was a dramatic, 70% increase increase on the previous £3bn paid by Sky and BT Sport for 2013-16, and every deal before that. In historical terms, the 2019-22 money is huge, £3.579bn paid by Sky for the prime time packages and to maintain its “Super Sunday” dominance. This is in-your-face evidence that in a non-stop blizzard of media and internet “content”, live top-flight football remains a solid landmark, central to pay-TV companies’ ability to maintain subscribers.

Sky’s massive commitment is still £199m less than it paid for the current rights, but that is thought to be due to BT Sport deciding to stick with what it has, no longer trying to establish itself by paying hugely to blow Sky out of the water. BT Sport is still paying £885m, for only 32 Saturday matches per season kicking off at 12.30pm, none of which will be “first picks”. That is not far down from the £960m the company paid last time – which bought them 10 more matches per season.

BT Sport, after it failed to supplant Sky’s near-monopoly hold on Premier League live matches, turned instead to buy up Uefa’s Champions League rights exclusively. It vastly increased the £400m previously being paid by Sky and ITV, and took the Champions League off terrestrial, free-to-air television for the first time. It must have considered it worked to haul subscribers in, and renewed again last year, paying £1.2bn to Uefa for the rights to broadcast matches in the 2018-21 seasons.

People wondering if the bubble is bursting are forgetting the history, and the companies which tried before to vault their fortunes on the backs of football subscribers. ITV Digital and Setanta went bust; ESPN did not persist. BT is a £24bn revenue behemoth still founded on the original nationalised telephone infrastructure, whose main business is mobile phone and broadband. It has seen pay-TV as a strategic way to attract subscribers, and built BT Sport into a credible broadcaster with a generally good sports package, not too reliant on archive or obscure filler. With that achieved, BT Sport said it was being “financially disciplined” not to bid for the prime Premier League rights this time, hence the dip in competition.

Football, with its crowds of avid supporters, remains what Sky discovered the hard way before 1992: about the only “content” which brings people so loyal they are near-guaranteed to fork out when a subscription becomes required. Rupert Murdoch described sport in 1996 as a “battering ram” for the expansion of Sky, and so it has been.

The very founding purpose of the breakaway by the Football League’s First Division clubs to form the Premier League in 1992 was to sell their TV rights for dramatically more than they did previously to free-to-air ITV, and not to share the bonanza with the clubs in the three lower divisions. The deal just concluded means not one top-flight English match will be shown live on terrestrial TV for fully 30 years since then. Some supporters might still lament that football is the people’s game, and their loyalties should not be so comprehensively sold behind a paywall, but the battering ram flattened that view a long time ago.

1 Betting shops face uncertain future as they prepare for Monday reopening
2 How a GAA club sprang up in east Belfast over Sunday breakfast
3 Drew Brees apologises after LeBron James leads backlash to anthem comments
4 Liverpool could seal title win at Anfield when they host Crystal Palace
5 Lifting the lockdown: what does it mean for sport?
Real news has value SUBSCRIBE