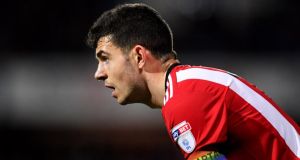 Brentford defender John Egan says that the second concussion he sustained in a matter of months, “knocked him for six,” but insists that having returned from a second spell on the sidelines over the weekend, he is determined not to let the fear of further injury change the way he plays.

The Republic of Ireland international missed nearly a month of first team club action after suffering a head injury in a clash with Bolton’s Jem Karacen back in late September. The defender played on for a quarter of an hour but eventually conceded that he was struggling and needed to come off. He didn’t return to action for Brentford until mid October when the club beat London rivals Millwall.

The second injury came in December in the run up to the league game against Norwich with manager Dean Smith revealing in the pre-match press conference that Egan, who had played 90 minutes a few days earlier, had taken “a whack to the head,” presumably in training. This time, the Corkman’s return had to be put back a couple of times as he struggled to make a full recovery, something Egan admits started to become a more serious concern.

“The concussion hit me for six really and it has taken a while to get better,” he said. “The medical team were great with me; they were very patient and the gaffer as well. (But) it took a few weeks to get my head right.

“It was my second one of the season (and) took a bit longer than normal to heal. Concussion is a bit of a grey area. No scans can determine the extent. It’s all about how you’re feeling. I tried to return to play a couple of times and I wasn’t feeling great.

“Going to see the specialist which the club sorted out was good for my head,” he continuied. “He was able to tell me it’d be fine but it’d take longer than expected.

“These things worry you at the time so hopefully I’ve come out of it stronger. The main thing is time. As a centre half you have to put your body on the line and that won’t change.”