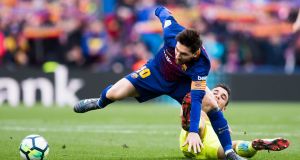 Argentina’s national football association (AFA) president Claudio Tapia has said he has spoken to captain Lionel Messi about playing fewer games for La Liga side Barcelona in order to stay fresh for his country ahead of the 2018 World Cup.

Tapia’s pleas have largely gone unheeded by Barca coach Ernesto Valverde, who has started Messi in 33 of the team’s total 39 games this season, only leaving him out of the matchday squad in three King’s Cup games.

The coach did leave Messi out of the starting line-up for the first time in the league against Espanyol on February 4th but threw the Argentine on as a substitute to help salvage a 1-1 draw.

“I hope all the players arrive in the level they are at the moment. Sergio Aguero is playing outstanding right now and Lionel Messi is always at the top of his game,” Tapia told Argentine network TYC Sports.

“That’s vital for the directors and the coaching staff. We have spoken to Messi about taking care of himself and about playing less for Barcelona.”

Tapia also said Argentina are planning to play a friendly against Catalonia in June as part of their preparations for the World Cup in Russia, where they will hope to better their runners-up finish four years ago in Brazil.

A game against Catalonia could theoretically see Messi come up against Barca team mates Sergio Busquets, Sergi Roberto and Gerard Pique among others. However, such a fixture could prove controversial in Spain after increased tensions between the central government and the region over its independence drive.