Tottenham have improved beyond all recognition – Eriksen 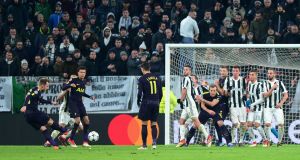 Christian Eriksen has said Tottenham are virtually unrecognisable from the club he joined in 2013 as he reflected upon Tuesday night’s stirring 2-2 draw at Juventus and looked to the future with optimism.

The Denmark midfielder, who starred in the last 16, first-leg tie and scored the equaliser with a clever free-kick, had previously been tempted by a move to Juventus. The Italian club have tracked him in recent years and they pushed hard to sign him in the summer of 2015.

Tottenham refused to sell and Eriksen has since enjoyed the Mauricio Pochettino-inspired upturn at the club.

The 26-year-old signed a four-year contract in September 2016, after a season in which Spurs challenged for the Premier League title and qualified for the Champions League, and there have recently been suggestions that he is ready to agree to further fresh terms.

Eriksen joined from Ajax as Tottenham splurged €12 million of the then world record €96m fee that they had received for Gareth Bale from Real Madrid. Bale could not see a pathway to the elite level at Tottenham but the club have now presented compelling evidence that they belong among the best.

In this season’s Champions League, Tottenham drew at Real Madrid before beating them at home while the result at Juventus puts them in the driving seat to advance to the quarter-finals. The hope at boardroom level is that players such as Eriksen can see Spurs as a destination club rather than a stepping stone.

“The club is completely different from what it was when I came to what it is now,” Eriksen said. “That’s up to the manager and up to the players, with the quality we have in the squad. We are building on every season compared to when I arrived here.”

Tottenham trailed 2-0 to Juventus after nine minutes but they did not cave in. Far from it. They came to dominate the game and they were value for the draw. “The games against the top teams, when we were 2-0 down after nine minutes, we’d lose 6-0,” Eriksen added.

“That’s the thing we’ve changed with the manager coming in and with the players we have. Everyone has grown up and they are not going to lie down if they are 2-0 down.

“We don’t care where we are or what time it is or which stadium we play in or which we team we play, we always try to dominate; to get the ball forward as quickly as possible and create something. After 2-0, Juventus dropped a bit, which gave us a bit more of the ball.”

As with all of Tottenham’s key personnel, Pochettino has his admirers at Europe’s biggest clubs – chief among them Real Madrid. But Eriksen hopes and believes that the manager is in the job for the long-haul.

“I think what he’s building here, he would like to be part of it,” he added.

“I think that’s what he showed when he signed his new long-term deal [in May 2016] . Of course, there will be interest from other clubs because he’s doing really well but hopefully he’ll stay. The players are happy with him and the club is very happy with him but, of course, it’s his decision.”