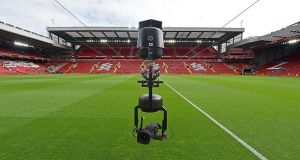 The payTV broadcasters Sky and BT Sport have retained their hold on live televised Premier League football, paying £4.464bn (€5.013bn) to the clubs for the rights to the five main packages of matches from 2019-22.

Two minor packages of rights remain to be sold, a new experiment by the Premier League to allow the entire fixture list of 10 matches to be broadcast simultaneously, four times a season. BT Sport said in a statement that it remains interested in those further rights, with the internet platform Amazon also said to be interested in securing some Premier League matches.

Sky committed to paying £3.579bn over the three years of the next deal, confirming that this is a significant reduction on the £4.1bn the broadcaster is paying for its prime packages in the current 2016-19 seasons.

It will, though, have the rights to 128 matches, two more than under the current deal, and has bought every weekend “first pick” of matches and the most coveted kick-off times. Its packages will show matches at 5.30pm on Saturdays on 32 match days; Sundays at 2pm and 4.30pm and eight matches on Saturday nights at 7.45pm, the first time the Premier League has played matches at that time. Sky’s fourth package comprises Monday night and Friday night matches.

“Sky has chosen to pay £1.193bn per annum under the terms of the new deal,” the company said in a statement, “down £199m per annum, a 16 per cent cost reduction per game versus the current agreement.”

Sky paid more last time to preserve its dominant payTV position in the UK against the serious competition of BT, which was bidding to establish its own subscription television service, to also support its commercial broadband ambitions. Having secured one package of 42 matches in the current deal, and the rights to all UK broadcasts of the Champions League, BT Sport said it had “remained financially disciplined” in the auction for the 2019-22 rights.

The company has committed to paying £885m in total, £295m a year, for 10 fewer matches, 32 in total, all kicking off at 12:30pm on Saturdays. Of these, 20 will be “second pick” of the weekend’s most attractive matches for a broadcast audience and the remaining 12 will be “fifth pick”.

Still predominantly a phone and broadband provider, BT Sport said it expected to make a profit on its £885m outlay: “BT Sport has remained financially disciplined during this process and remains in a strong position to make a return on this investment through subscription, wholesale, commercial and advertising revenues, especially following the acquisition of [mobile telephone network] EE, which more than doubled BT’s customer base,” the company said in its announcement.

The sudden ferocity of competition between Sky and BT Sport which boosted the Premier League clubs’ coffers for the 2016-19 cycle has calmed a little after the two companies signed a deal in December which enables each to offer the other’s channels on their platform. Sky, which has based its original revival from financial difficulties in 1992, and escalating commercial fortunes since, on securing exclusive rights to live Premier League football, is to show the matches on its dedicated Premier League channel. Famously Sky’s head of sport, David Hill, said in 1992 that of the sports needed to be secured whose supporters would pay subscriptions to watch it in Britain “it’s football first, second and third.”

Four years later Rupert Murdoch, chairman and major shareholder in the BSkyB parent company, described sport as a “battering ram” for the expansion of Sky globally, the only programming which is guaranteed to bring an audience. Buying the live rights to matches through to 2022 means that Sky will have had exclusive access to sell subscriptions for Premier League matches for all 30 years since the Football League’s First Division clubs broke away to form their own league in 1992.

Commenting on the reduced £3.579bn the company is paying for its four prime packages, Stephen van Rooyen, Sky’s UK chief executive, said they had taken a “disciplined approach”.

The announcement of reduced income with two packages still to be sold was in line with analysts’ predictions that the auction would not surpass the record £5.1bn Sky and BT Sport paid for the current three-year cycle. The deals maintain the Premier League as by far the world’s richest football league, with the overseas rights sales still to be concluded. The Bundesliga recently announced its next four year deal will be €4.64bn in total.

Manchester United fans accused of making homophobic chants 09:04
Diego Simeone raises the roof with sideline spectacle 08:28
Jurgen Klopp: ‘welcome to Anfield, it’s not over yet’ 07:55
Liverpool frustrated and beaten in first leg in Madrid; Ireland to reveal XV for England 07:30
Seán Moran: GAA in trouble if sectional interests not accountable to rules 07:00

1 Gordon D’Arcy: Digging deep only recipe for Twickenham success
2 Robbie Henshaw and Bundee Aki to lead from the centre
3 Kieran Donaghy calls for GAA to shut down fans’ forums
4 Jurgen Klopp: ‘welcome to Anfield, it’s not over yet’
5 Seán Moran: GAA in trouble if sectional interests not accountable to rules
Real news has value SUBSCRIBE
Crossword Get access to over 6,000 interactive crosswords