Giallorossi fight back late after Salah puts them to the sword 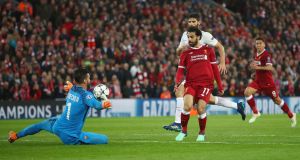 Of all the mesmerising nights Liverpool have experienced under Anfield’s floodlights in European competition, where does this one stand? Up there, surely, with Saint-Étienne in 1977, the take-a-bow goal from Steven Gerrard against Olympiakos in 2005 and the fightback against Borussia Dortmund in 2016. Liverpool have put themselves in command and, barring an almost implausible feat of escapology, can start looking forward to the final in Ukraine on May 26th.

The only possibly note of caution could be that Roma have already overcome a 4-1 first-leg deficit in the Stadio Olimpico against Barcelona in the quarter-finals. On that basis, Jürgen Klopp will be dismayed by his team’s carelessness when they had a 5-0 lead. Perhaps the manager made a mistake of his own by withdrawing Mohamed Salah, who had scored two and set up another couple. Roma promptly scored twice and, somehow, Liverpool managed to combined scoring five times with a nervous climax to an extraordinary night.

Ultimately, though, it was another triumphant night for Klopp’s men and they will go into the return leg in a position of considerable strength. True, it might not have been the position they anticipated when they led by five goals and were threatening to add even more. But what does it say that they could win so thrillingly and still end up looking a shade disappointed at the final whistle?

When Manchester City came here in the quarter-finals Liverpool inflicted the damage with a blitz of three goals before half-time. This time, Klopp’s men restricted themselves to Salah’s double and for almost half an hour Roma created the illusion that they might actually be more streetwise opponents than Pep Guardiola’s team – not so easy on the eye, but a different kind of challenge, quick to the ball and strong in the tackle.

That, however, turned out to be a deception and it was a remarkable spell from Liverpool once they found their rhythm, attacking from every angle, with Salah at the hub of everything. That was the period when the Egyptian scored his 42nd and 43rd goals of the season but Liverpool, if anything, might have felt aggrieved not to have added more. Sadio Mané squandered two golden chances in quick succession before Salah curled in a beauty to open the scoring. At 1-0, Dejan Lovren headed a corner against the crossbar. Liverpool, once again, were looking for a quick kill and the volume was turned to its highest.

Those were the moments when we were reminded why Roma have won only one of their last 14 Champions League excursions and not kept a clean sheet in 26 away games in this competition. There is only Celtic, with 30, who have gone longer and Liverpool are merciless when they sense weakness in the opposition defence. Mané’s finishing might have been erratic but he quickly realised he had the beating of Federico Fazio, formerly a Tottenham Hotspur reserve. Roberto Firmino rarely disappoints on the big occasions and then, of course, there was the little guy holding up his palms in front of the away end to apologise for his goals.

Salah scored 34 times in 83 appearances for Roma but his performance here was another reminder that he is now playing at a different level. His first goal was a peach but the second one was not too shabby either. Firmino slipped the pass through the middle and once Salah reached the ball first there was a sense of inevitability about what would happen next. He took a touch to steady himself, then lifted the ball over Alisson as if it was the easiest thing in the world.

One downside for Liverpool came in the form of the injury suffered by Alex Oxlade-Chamberlain when he slid in to challenge Aleksandar Kolarov in the first half. His knee took the impact and it was obvious straight away that the midfielder was in a lot of distress. He was taken off on a stretcher and his chances of being involved in Rome look minimal. Indeed, Oxlade-Chamberlain seemed so badly hurt there have to be concerns it might be a more serious lay-off for the England international. Oxlade-Chamberlain has a World Cup starting in two months and, almost certainly, a Champions League final he will not want to miss.

Klopp, of course, will not be so presumptuous but Roma disintegrated once Liverpool, to use one of the manager’s sayings, started to play “pressing from another planet”. In those moments it was easy to pity Eusebio Di Francesco’s side. They were taking an almighty chasing, outclassed in every department, and one of the more alluring traits of this Liverpool side is that when they are in a winning position they always go looking for more goals. Another team might have prioritised a clean sheet in the second half. Liverpool, on the other hand, sensed a rout.

Mané added the third goal in the 56th minute from one of Salah’s expertly placed centres and Firmino made it 4-0 six minutes later from a similar position. Again, it was Salah who set it up, eluding the nearest defender Juan Jesus before picking out his team-mate to turn the ball in from close range.

When Firmino headed in James Milner’s corner for the fifth goal it needed a few moments to take in the fact Salah had not been involved. But then Liverpool’s chief tormentor was withdrawn and Roma suddenly found some momentum. Edin Dzeko pulled the first back after Lovren missed a header and the substitute Diego Perotti added another four minutes later from the penalty spot after Milner’s handball. Liverpool, incredibly, were hanging on by the end – but surely the eighth final in the club’s history awaits.