The rise of ‘Masters’ football: filling the void for players and fans alike 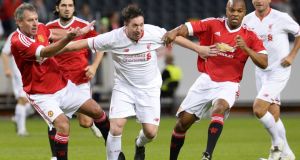 As soon as he hit the pass, Xabi Alonso stopped dead in his tracks, and raised his hands to his head in horror.

He had picked up possession on the edge of Liverpool’s penalty area, directly in front of the Kop. He was under no pressure. He turned elegantly toward his goal, ready to build yet another attack.

He has done it thousands of times over the years, and this time, too, he looked a picture of calm — right up until he played the ball directly into the path of a slightly startled opposition striker. Liverpool, a few minutes before, had been three goals ahead. Now, thanks to Alonso’s momentary mindlessness, they were 4-3 down. Alonso looked at the floor. He raised a plaintive hand to his teammates and to Anfield, packed to the rafters, in apology; he shook his head, as if to clear the cobwebs.

And then the crowd laughed.

The mistake did not matter, and nor did the score. It was, after all, only a game between a team of retired Liverpool players against a collection of Bayern Munich veterans, staged to raise money for Liverpool’s charitable foundation. Beyond a little pride, there was nothing riding on it.

So nobody objected when Alexander Zickler, the beneficiary of Alonso’s generosity, raced over to thank him, with pantomime ostentation, for the assist. Everyone got the joke: Alonso would be switching teams at halftime anyway; a veteran of both Liverpool and Bayern, he had, briefly, forgotten whose side he was on.

There can be a strange air to soccer played not for points or for trophies, but for its own sake. Think flat, rootless preseason tuneups, or international friendlies, where mindless waves sweep through indifferent crowds. Few fans enjoy those occasions: To most, they are something to be endured before the real business — soccer for a purpose — can start again. They feel somehow decaffeinated, fat-free: diet sport.

Games between teams of alumni and veterans — masters or legends teams, as the marketing always has it — should, if anything, be worse, even more meaningless, even more devoid of tension. And yet, that afternoon late in March, Anfield was almost full. Nearly 55,000 people were there when, with a few minutes to go, the former Liverpool defender Bjorn Tore Kvarme scored the game’s final goal. It finished 5-5.

There is, it seems, a considerable, widespread appetite for seeing former players back in a team’s colors. Masters tournaments are nothing new — in England, an annual Masters Football competition ran until sparse attendances and dwindling television interest forced its cancellation in 2011 — but never before have they been such a boom industry.

Now a host of clubs regularly stage veterans’ games in support of charitable foundations, and a raft of organizations and tournaments have sprung up to meet the rising demand, particularly for short, small-sided games. Some of that is in Europe — Berlin’s AOK Traditionsmasters has been played every year since 2010 — but, increasingly, it is also further afield.

Masters Football may no longer hold games in England, but it stages regular meetings of teams representing Liverpool and Arsenal in Singapore. Football Champions Tour has been arranging showpiece games for 10 years and, last year, together with the marketing agency Pitch International, launched Star Sixes in London.

It intends to turn the format into an annual event and, though attendance in London was good, according to F.C.T.’s director, Jamie Jarvis, the competition’s next iteration most likely will be in Asia.

“A lot of the interest is from markets that did not see these players day in, day out during their careers,” Jarvis said. “But London is a difficult market. We have had interest from Qatar, the United Arab Emirates, China, South Africa, Tokyo, Sydney.”

F.C.T. tends to recruit high-profile former stars — Star Sixes featured the likes of Luis Figo, Roberto Carlos and Carles Puyol — to play six-a-side games, on the grounds that full-scale matches on full-size pitches can be a “hard slog” not only for the older players, but for the fans.

That is part of the appeal, of course: the chance to see recently retired heroes in action, something that fans in the Far East were not able to do during their careers. But the opportunity to get close to them is another draw: retired players are “far more accessible” than their successors, Jarvis said.

It is an approach that AOK Traditionsmasters has used since its inception eight years ago, pitting teams representing various German and international clubs against each other over the course of six hours in the Max-Schmeling-Halle in Berlin. “Our visitors can get autographs and selfies with the players,” said the event’s founder, Bernd Kühn. “As well as six hours of great soccer, for a much cheaper price than you pay to go to a Bundesliga game.”

Most important of all in his eyes, though, is the shot of nostalgia the occasion provides. “It is a chance to see the old guys,” he said. “You can dream of the old days, and show your kids the players you loved.” The fact that there are always “one or two players who are heavier than the audience” does not hurt, either.

Kühn’s tournament will be 10 years old next year, when for the first time he plans to hold it over two days. Ideally, he said, he would like to hold qualifying events across Germany, turning the Berlin showpiece — at the height of the Bundesliga’s winter break — into a national finals. He feels there is enough appetite among fans. If anything, though, the players are even more enthusiastic.

Like many former players, Viv Anderson, once of Manchester United and England, compares retirement to suffering “a bereavement.” It is the loss of the only life many players have ever known; few are prepared for what happens away from the cocoon of a professional club, and the sanctuary and spirit of a dressing room.

“Every week that goes by, the phone rings a little less often, you feel that bit more isolated,” Anderson said. “But the club has moved on. The agent has moved on to the next shiny star. For the first two weeks, maybe, you enjoy it. By the third week, you’re asking, ‘What am I going to do now?’”

Many struggle to find the answer. Research by FIFpro, the global players’ union, has suggested that as many as 35 percent of former players have depression and anxiety. Xpro, a charity set up to help with the welfare of former players, found that 40 percent are declared bankrupt within five years of retirement, while 33 percent are divorced within 12 months.

It is here, Anderson said, that veterans games can help. He is now the chief executive of PlayOnPro, an organisation that aims to keep former athletes from a variety of sports in touch with one another, and with various work opportunities.

PlayOnPro has launched an app, accessible only to members, to help players reconnect with old friends, as well as to find out about after-dinner speaking engagements, golf outings and playing opportunities. Last year, the group sent a team to a seven-a-side tournament in Hong Kong.

“They might have money in the bank,” Anderson said, “but we try to give them somewhere to go, something to get up for. Players don’t miss winning trophies when they retire. They miss the camaraderie of the dressing room.

“You do not earn a fortune for playing in these games: maybe a bit of spending money for while you are there. But it means you can speak to people you have not spoken to for years, and to live the same life you had 20 years ago, even if it’s just for a few days. It is something to look forward to.”

Players, even in their relative dotage, love playing, he has noticed. Games that are meant to be exhibitions quickly turn serious; so serious that Kühn, at least, has considered banning tackling in his competition.

“The competitive juices flow pretty quickly,” Jarvis said. No matter where the game is, no matter who they are representing, no matter how old they are, “players want to come and win.”

About an hour into the game at Anfield, Hans Pflügler replaced Lothar Matthäus in Bayern’s team. Pflügler is 58 now: He first left Bayern in 1992, having spent his entire career at the club, before returning in 1995. He retired, finally, in 2002, at age 42.

By the time he came on against Liverpool, the pace had slowed considerably. John Aldridge, a former Liverpool striker, had made a brief cameo, twice losing his footing as he tried to run, his pratfalls greeted by uproarious laughter.

Pflügler, though, was in no mood for silliness. He thundered into tackles and protested when he conceded a free kick. He heaved the ball into the crowd as Liverpool pushed for an equalizer, complained to the referee about his decisions, rallied his teammates to hold on to their lead. There was nothing at stake, but Pflügler wanted to win.

Sometimes, even games that do not matter have a meaning.