Pep Guardiola’s side suffer a first defeat in 227 days 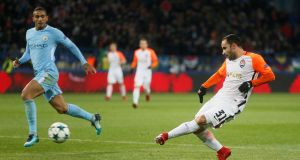 Manchester City lost for the first time in 227 days and so failed to become the first English side to be victorious in all six Champions League group matches. Pep Guardiola’s side were poor in the opening 45 minutes, then rallied after the break.

Sergio Agüero scored a late penalty after Gabriel Jesus was felled but this was a consolation only. As an arch-winner, Guardiola will hate losing but having chosen a weakened XI the manager can be phlegmatic as preparation for Sunday’s 175th Manchester derby now begins.

At 17 years and 192 days, Phil Foden was the youngest player to make a Champions League start for an English club since Cesc Fabregas for Arsenal in 2004. Foden lined up on the left of a midfield that had Yaya Toure as the holder, Ilkay Gündogan as string-puller, and Danilo along the right.

Guardiola made seven changes from the weekend’s win over West Ham, with only Ederson, Danilo, Leroy Sane and Eliaquim Mangala surviving, the manager resting key players ahead of the derby at Manchester United.

This suggested City might be vulnerable and so it proved as they ended the half two goals behind. There was an early scare when City defender Tosin Adarabioyo’s miskick let Taras Stepanenko in along the left. This allowed Stepanenko to play in Facundo Ferreyra but his shot was blocked.

Moments later Guardiola displayed his penchant for interacting with opposition players. When Danilo and Bernard clashed, the latter was given a friendly hug. This was all occurring in an OSK Metalist Stadium that had plenty of empty seats, which was understandable given Shakhtar’s home is 155 miles way, in what remains a war zone.

From this juncture Guardiola’s mood darkened to disquiet. First, he believed Foden had been felled. Then, as he remonstrated with the fourth official, Paulo Fonseca’s side broke and, after play switched to the right, Marlos warmed Ederson’s fingers for what was a comfortable save.

On 26 minutes the Brazilian could do nothing about Bernard’s opener. Danilo, though, should have done. In backing off he allowed the Shakhtar winger time to fashion a sweetly struck curler beyond Ederson into his top left corner .

That advantage could and should have been doubled by Ukraine’s champions virtually from the kick-off. Once more it was Bernard who had time to aim at Ederson’s goal, though this time the City goalkeeper made a save to his left.

Fonseca’s men did score a second soon after, however. Yet again it stemmed from City’s right as a long ball bounced into space, Ederson mistimed a charge out and Ismaily turned it into an open goal.

As should be expected, City rallied. Foden mis-kicked one effort, defender Ivan Ordets blocked a Gündogan shot, and Jesus ran clear before goalkeeper Andriy Pyatov intervened. Yet by the interval City had to defend two corners, and Taison became the latest Shakhtar player to unload at Ederson, though the effort went high.

Despite the City’s dire showing in the first half, Guardiola decided against any changes at the interval. A bright beginning saw Bernardo Silva find Sane, whose first-time shot forced Pyatov into a save

The City manager, though, was soon angered again due to yet another Shakhtar foray down their left. Foden was not having the best game – when City next attacked and Toure found him, the teenager sliced the ball straight into Pyatov’s arms when the Ivorian was screaming for a return.

There was, at least, some consistent City pressure now. Silva stood the ball up for a misdirected header and Guardiola applauded the effort. On the hour he made a move, swapping Sane for Brahim Diaz, an 18-year-old midfielder making a third City appearance and who added some required zest.

In a bid to protect the unbeaten record, Guardiola next brought on Agüero for Fernandinho. Yet it was Diaz who created a opening for Jesus to hit the post. Agüero slotted in the spot-kick in added time but it was not enough.

Next, all eyes turn to Old Trafford. It will be a major surprise if City are again as disjointed there. – Guardian service

Feyenoord ended Napoli’s slim hopes of reaching the last 16 as Jeremiah St Juste’s late goal snatched a 2-1 win for the Dutch side.

St Juste scored from a corner in the last minute for Feyenoord, who had been reduced to 10 men in the closing stages.

Napoli, who drop into the Europa League, had made a blistering start in their bid to stay in contention with Piotr Zielinski opening the scoring in the second minute.

The Italian club’s hopes of snatching second place in Group F however were hit as Feyenoord fought back to equalise through Nicolai Jorgensen before claiming the dramatic winner and their first points in this year’s group stage.

Napoli finished third in the group with six points, three ahead of Feyenoord and six behind second-placed Shakhtar Donetsk.

Napoli had to win, and hope that second placed Shakhtar lost in their home clash with group winners Manchester City.

Yet after a positive start the fight seemed to go out of Napoli when the Ukrainians went 2-0 up against City in the first half of their match, which finished 2-1.

Dries Mertens and Marek Hamsik both had chances to increase Napoli’s lead before Feyenoord levelled on 33 minutes as Steven Berghuis’s cross was headed into the net by Jorgensen.

Tonny Vilhena was sent off for a second booking in the final five minutes but Feyenoord forced a corner in the closing stages from which St Juste found the net.