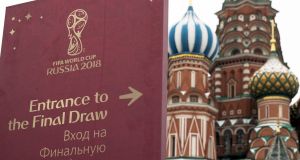 The darkness will be thick and the temperature below freezing in Moscow when the first ball is drawn but the historic snow-dappled domes of St Basil’s Cathedral remain visible from the Kremlin palace even at night.

As a setting for the World Cup draw it is a perfect showcase, the imposing buildings of the fortified complex and Red Square totemic of Russian power and influence. There are Christmas lights, an ice skating rink and hot sausage stalls in the shadow of one of the most uncompromising political regimes of the modern era.

That contrast between fun and fear will be embodied by next summer’s World Cup. A chance to watch Lionel Messi and Cristiano Ronaldo but also the knowledge that the host country has serious questions to answer on its attitudes to race, sexuality and human rights. It is understood Vladimir Putin, although not a football fan, will provide an opening address at the draw, keen presumably to take advantage of the political capital on offer.

For all the understandable wariness of Russia 2018, Moscow has offered a window into what the World Cup may be like when it gets under way on June 14th. Access has been closely controlled by the security services but an army of volunteers, decked in red, demonstrated an eagerness to please and experiences have been mostly positive.

The foreign media, often cast as an enemy faction by Putin, were treated to a special performance by the Moscow State Academic Theatre and offered gifts of notepads and Russian dolls from the 11 host cities.

“There is an excitement about the World Cup,” one local said. “People are looking forward to it and want to put on a show – but perhaps not as much as before the Olympics when it was thought it could change how the world viewed Russia. They’ve learned how wrong they were.”

Sochi 2014 and the systematic doping that blighted that event and at least the three preceding Olympics has only reinforced negative views of Russian culture, its attitude towards sport and fair play. On Thursday evening, as Gordon Banks and Fabio Cannavaro spoke of their delight at being chosen by Fifa as draw assistants, news filed through of another two positive drugs tests from Russian athletes at London 2012. Of 226 samples collected from Russian athletes who participated in London and retested, 21 have been dirty.

Vitaly Mutko, the country’s sports minister at that time, is now not only Putin’s deputy but the head of the Russian FA and will be a key figure at the draw. This is despite the publication this week of diaries belonging to the Russian doping whistleblower Grigory Rodchenkov, a former head of the Moscow drug lab, which detail meetings with Mutko and offer the strongest evidence yet that Mutko fully knew of the systematic doping programme.

While Mutko may be on borrowed time pending further revelations, it is too late now for there to be any realistic prospect of Russia being stripped of the World Cup.

At the hotel where Fifa executives are staying, Michel D’Hooghe, the chairman of the medical committee, was at pains to insist doping control would be kept out of the hands of the hosts.

“The anti-doping control will be done by medical officers of Fifa not Russia – nothing will be in the hands of the Russian organisers,” he said. “With the rumours around Russia it’s one reason more to say we give nothing of the doping control to Russian doctors, to the Russian authorities, to the local organising committee.”

Nevertheless, there is understandably widespread disquiet about a country guilty of such craven cheating being given the honour of hosting football’s biggest showpiece.

Even before the doping programme was exposed, the way Russia came to win the 2018 bid was the subject of much consternation. It was Gary Lineker who revealed to a group of British journalists that England would be knocked out in the first round of voting despite being among the favourites to host.

He broke ranks from assembled dignitaries in Zurich in December 2010 to express his disgust. Most of the Fifa executives who voted on Russia and Qatar 2022 have been exposed as having been part of an organisation characterised by bribery and corruption.

It was only six months ago Lineker tweeted: “Fifa bidding process created a murky world where favours/bribes were just thrown around. Stinks.”

So his decision to accept the governing body’s invitation to co-host the draw alongside the TV presenter Maria Komandnaya prompted some raised eyebrows.

Some commentators believe Lineker’s involvement is wrong because it gives a cloak of legitimacy to the governing body. If Lineker, once such an ardent critic, is willing to align himself with it then things cannot be so bad, surely?

The golden boot winner defended himself. “There is a new guard,” he said. “If it were still Blatter and his brigade I would not have done it. I was approached by [Fifa’s technical development director] Marco van Basten and [deputy general secretary] Zvonimir Boban. They are two good football people. I hope and think Fifa is changing. New people deserve a chance to prove it is, we will see.”

Whether the world will offer the same olive branch to Russia as Lineker has to Fifa remains to be seen.

1 Kevin McStay: Maybe a knockout All-Ireland Championship is the long-term solution?
2 Gerry Thornley: Ireland don’t want to box themselves into a corner
3 Fernandes on the double as Manchester United get their revenge
4 Former France and Stade Francais winger Dominici has died aged 48
5 Owen Doyle: Ireland suffered from officiating of the breakdown
Real news has value SUBSCRIBE
Crossword Get access to over 6,000 interactive crosswords