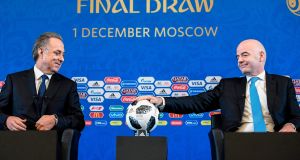 How awkward it has been for Fifa and its president, Gianni Infantino, ruthlessly plotting a course towards next year’s World Cup in Russia, that the International Olympic Committee (IOC) banned the country from the Winter Olympics – and the senior minister Vitaly Mutko from the Olympics altogether – for state-sponsored doping.

The IOC’s decision should mean Fifa has no hiding place from a clear ethical stance on Russia’s appalling violations, but it has only shone an unforgiving light upon Fifa’s current dependence on Russia. Infantino is spending plenty of quality time with Mutko, who is president of the Russian football association and World Cup organising committee, and they were shoulder to shoulder during the draw last week, for a tournament Infantino considers immovable and essential to bring the dollars in.

Fifa’s statement in response to the IOC’s ban was a tapestry woven around the central issue, which should be ethical alarm at Russia and Mutko. Top, for the avoidance of doubt, was that the IOC’s decision “has no impact on the preparations for the 2018 Fifa World Cup” – for which, by the way, ticket sales are proceeding heartily.

Fifa said it “takes its responsibility very seriously” on anti-doping and is “investigating the allegations” made in the devastating report by the Canadian law professor Richard McLaren last year, which exposed Russian state involvement in doping athletes while Mutko was the sports minister. Fifa said it would “impose the appropriate sanction” should “any athlete” be found to have violated anti-doping rules – but that appears to relate solely to footballers, against whom it suggested there was not enough evidence.

At the end of the statement was the only oblique reference to Mutko: “When it comes to potential disciplinary or ethical matters concerning specific individuals, it will be up to the respective Fifa bodies to evaluate them.”

Reading that, a trusting football supporter, properly concerned about Russia’s monstrous doping programme, would think that Fifa’s “respective bodies” will only now begin to look at the McLaren report, and the IOC’s decision, and begin to “evaluate” them.

Yet the fact is that Wada explicitly called on the Fifa ethics committee to investigate Mutko’s role, and the allegations relating to football, as long ago as July 2016 when it published McLaren’s report. Mutko denies, in effect, the whole report, and dismissed its allegation of state-sponsored doping again last week when he and the Russian president, Vladimir Putin, had the world where they wanted it, in Moscow, for the draw.

“Deputy minister Nagornykh told [Rodchenkov] that minister of sport Mutko was aware of everything that they were discussing,” McLaren wrote. “Dr Rodchenkov’s evidence is that it is inconceivable that minister Mutko was not aware of the doping cover-up scheme.”

Mutko is also accused of direct personal involvement in a doping cover-up for “at least one foreign footballer playing in the Russian league”, the report stated. “That ‘SAVE’ decision was made by Minister Mutko and not deputy minister Nagornykh.”

Following Wada’s call, Fifa’s ethics committee, then chaired by the Swiss prosecutor Cornel Borbély, did begin an investigation, senior sources have confirmed, but he was not provided with evidence he considered sufficient to bring any charges.

Seventeen months later, Borbély is gone, removed by Infantino, and there is no news of any investigation. Infantino orchestrated the removal in May of Borbély and Hans-Joachim Eckert, the German judge who chaired the ethics committee’s branch determining sanctions, which was rubber-stamped by the Fifa Council. Both men argued their removal was “incapacitating” Fifa’s ethics process, and that hundreds of cases were ongoing.

It was revealed soon afterwards that Infantino himself had been under investigation for complaints that he interfered in the election of a new president at the Confederation of African Football, and for allegedly under-declaring the budget he was given by Uefa, where he was previously general-secretary, to campaign for the Fifa presidency.

Miguel Maduro, an internationally renowned Portuguese law professor, was also fired from his chairmanship of Fifa’s governance committee. He then revealed that Infantino had interfered with a committee decision to bar Mutko from being on the Fifa council. The governance committee’s decision was based on upholding Fifa’s rule that council appointees must be politically neutral, while Mutko was clearly a senior Russian politician. But Maduro said Infantino believed his own survival was threatened if Mutko was removed, and Fatma Samoura, Fifa’s secretary-general, came to see Maduro.

“The secretary-general made it clear [the Mutko decision] was extremely problematic and we needed to find a solution to declare Mr Mutko eligible,” Maduro told the parliamentary select committee for culture media and sport in Britain back in September. “She said that the World Cup would be a disaster and that as a consequence the continued presidency [of Infantino] would be in question.”

Infantino denies any wrongdoing and Mutko remains the organiser of Fifa’s next World Cup. The impression lingers that Infantino and Fifa feel deeply reliant on Russia and are terrified of anything that might disturb the peace, or Putin. Borbély may have decided before his removal that the documented evidence against Mutko personally was not strong enough, but after the IOC’s further work and decision, there was no sense of alarm at Fifa HQ, or of eagerness for a further push by the new ethics committee chairs.

The 2014 World Cup in Brazil made $4.8 billion for Fifa, and Russia 2018 will stuff the Zurich coffers with more. Russia’s state-controlled energy giant Gazprom is also a Fifa sponsor now – as is Qatar Airways, state-controlled company of the 2022 World Cup hosts.

Infantino can be imagined grumbling that it was easy enough for the IOC to act strong now, three years after the Winter Olympics in Sochi, where the Russian competitors were allegedly doping, but the IOC has long been safely back with the money. Fifa needs Russia to host its prime event, and no alternatives are being considered. For Infantino, Mutko is still in the clear, and the show must go on.