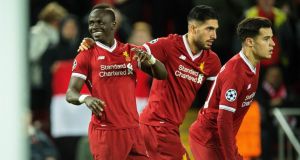 Liverpool’s Sadio Mane celebrates with his team-mates after his side’s fourth goal in the Champions League game against Spartak Moscow at Anfield. Photograph: Peter Powell/EPA

For Liverpool, this time there was never any danger that a 3-0 half-time lead could be lost. It was more just a surprise, having added two more within five minutes of the second half starting, that they restricted themselves to seven on a night when English football was assured of its fifth representative in the last 16 of the Champions League and Jürgen Klopp’s players had a lot of fun in sealing their qualification.

By the end it had started to feel faintly absurd that Liverpool’s second-half meltdown in Sevilla had left their final match in Group E with a precarious feel. It turned out to be a deception. Philippe Coutinho, such a wonderfully creative footballer, had his first hat-trick for the club.

The players of Spartak Moscow looked in need of smelling salts and the only slight oddity, perhaps, was that it took until the 86th minute before Liverpool’s leading scorer, Mohamed Salah, added his name to an already extensive scoresheet, with his 18th goal of the season.

By that stage Sadio Mané had scored twice. Roberto Firmino was also on target, in between Coutinho’s first two goals, during that early blitz when Liverpool went 3-0 up inside the opening 19 minutes and there was another statistic to tell us no other English team had ever qualified with so many goals – 23 from six group games. Paris Saint-Germain, who scored 25 times to qualify this season, are the only side ever to do better.

Liverpool will find out their opponents in the draw on Monday but first there is the small matter of the Merseyside derby on Sunday. Everton might be sturdier opponents now that Sam Allardyce has been parachuted in to restore some sense of order on the other half of town but, on this evidence, Klopp’s team will take some stopping.

Coutinho, in particular, looks like he has shaken the disappointment of his non-transfer to Barcelona out of his system. Wearing the captain’s armband on a night when Jordan Henderson was relegated to the bench, Coutinho has now been directly involved in 15 goals in his last 11 appearances, scoring nine and setting up another six.

Liverpool certainly began like a team in a hurry but it also must be said that not even the most optimistic Kopite could expect Everton to defend as generously as the team currently fourth in the Russian Premier League. Georgi Dzhikiya’s bewildering challenge on Salah, four minutes in, set the tone, presenting Coutinho with the chance to open the scoring from the penalty spot, and the same Spartak player carelessly lost the ball to Mané in the build-up to Firmino’s goal.

In between, Liverpool’s quick, incisive passing had carved open the visiting defence for Coutinho’s second of the night and the only surprise from that point was that Klopp did not start removing some of his players, thinking ahead to Sunday’s match, a little earlier. Alberto Moreno’s participation seems unlikely after the injury that forced him off late in the first half, with James Milner taking over at left back.

The other downside was that Emre Can will be suspended from the opening leg of their next European assignment because of the yellow card he received for an early challenge on Zé Luís. Can went into the match knowing that a booking would make him ineligible and it was strange, in such a one-sided first half, that he felt it necessary to lunge in that way.

Otherwise, Klopp’s men can reflect on a hugely satisfying evening in which Coutinho might have identified himself as the club’s new penalty-taker. Liverpool had failed to convert any of their previous four penalties at Anfield and when Coutinho picked out the bottom corner it was the first time in 13 months that one had been scored at this ground.

More importantly, there was some stylish, attacking football on show once the home team had realised their passage to the next stage of the competition was not in serious danger. The move for Coutinho’s second goal was particularly illuminating, with Salah and Firmino prominently involved, and there was an even more beguiling exchange of penetrative passes later in the first half, turning defence into attack and spoiled only by Mané’s wild shot. Firmino’s expertly taken finish, after a lucky ricochet off a Russian defender, demonstrated his own high confidence and the goals came early enough to make it a stress-free occasion.

The outstanding goal of the night came two minutes into the second half when Milner sent over a cross from the left and Mané leathered in an improvisational volley with so much power it might have done serious damage to someone in the Kop had it not rocketed into the roof of the net.

Coutinho’s hat-trick goal came via a deflection off Salvatore Bocchetti and, with 40 minutes still to play, it was almost a surprise Liverpool’s record win from the Champions League era, an 8-0 thrashing of Besiktas in 2007, remained intact.

Only just though. The substitute Daniel Sturridge set up Mané to make it 6-0 before Salah finally rammed in the goal his performance merited. - Guardian service

Sevilla stuttered into the last 16 of the after being held to a 1-1 draw by Group E’s bottom side Maribor.

Liverpool’s convincing victory over Shakhtar Donetsk – the Spanish team’s rivals for second place – ensured that even after dropping points to Maribor, they progressed to the knockout stage.

But in a one-sided second half, Sevilla breached the stubborn home defence when goalkeeper Jasmin Handanovic failed to keep out substitute Ganso’s low shot following good work by Joaquin Correa.

Maribor, the Slovenian champions, were already consigned to bottom place after scoring two goals in five group matches before this, their third draw in the competition.