For now at least, the clock has been turned back for Ajax 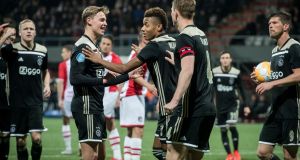 For Ajax, any visions of Juventus spool straight to memories of the one that got away. In May 1996, Louis van Gaal’s team were on the verge of becoming the first to retain the European Cup in its modern form. They met the Serie A champions in the final at Rome’s Stadio Olimpico and took it to penalties despite going behind. Destiny seemed to be favouring them, but Edgar Davids and Sonny Silooy missed from the spot and nobody in Amsterdam needs reminding that nothing has quite been the same since.

The revenge narrative has its place in Wednesday’s quarter-final first leg, but times have changed dramatically and the tie’s significance is far broader. Ajax, four-times winners of the world’s most famous club trophy, should not really be here; not if the runaway accumulation of wealth by an increasingly powerful few achieved its ultimate end. Twenty-three years ago the assertion would have seemed bizarre, even if warning signs were mounting. For now, at least, the clock has been turned back and they occupy the kind of perch that used to be familiar.

“Financially, the circumstances have really changed in recent years and for a country like the Netherlands it’s really difficult to get to this stage, only Portugal have been able to do it as well,” said their manager, Erik ten Hag, whose bewitching young side eviscerated Real Madrid at the Bernabéu in the round of 16. It was impossible not to get swept away by the romance of it all, the world’s richest club being humiliated at the hands of one that used to be considered its equal. Ajax played sensationally and a repeat performance might shock Juventus this time, too; it is unlikely to bring a wider reset of the world order, though, and they must bask in the slightly discomfiting status of welcome aberration.

“It’s not only good for Ajax but also for the Champions League,” Ten Hag said. “Because it’s not good that each year the same seven or eight teams get to the quarter-finals and win the competition. That is not what supporters want. Football has to surprise people and it’s very nice that we can be the surprise this year.”

Ajax have comfortably the lowest budget among the remaining contenders; six of the other seven are in the top 11 of this year’s Deloitte Money League, a 30-strong ranking in which they have not featured since 2014. They are making a mockery of numbers whose stacking this heavily against them is a scandal.

Ten Hag remarked that Ajax have “already pushed boundaries a number of times this season”. They drew twice with Bayern Munich in the group stage before their miracle in Madrid – which came after having lost the home leg 2-1 – and their success is, he believes, the result of a happy balance between youth and experience. A career-defining display from Dusan Tadic and a breathtaking free-kick from the veteran Lasse Schöne dominated the highlight reels against Real; they are among the players guiding a younger generation whose excellence makes those comparisons with the mid-1990s irresistible.

One of them, Frenkie de Jong, should be fit to face Juventus despite leaving Saturday’s 4-1 win at Willem II – which put them top of the Eredivisie – early with an ankle complaint. De Jong will join Barcelona in the summer and Ajax’s remarkable 19-year-old captain, the centre-back Matthijs de Ligt, will probably depart for a club of similar means. Others, like the playmaker Hakim Ziyech and the gifted schemer Donny van de Beek, may not be far behind in the exit queue and in that sense not much has changed at all. By the time Ajax met Juventus again, this time losing 6-2 on aggregate in the 1996-97 semi-finals, half of the captivating side that won the Champions League in 1995 had departed. The direction of travel has never been reversed but there are signs that, on the back of their Europa League final appearance in 2017, they have found a way to challenge again.

“We need to be creative and have a plan to compete with the top clubs,” Ten Hag said. Wednesday night’s will involve a flurry of movement and interplay, Tadic and Ziyech working between the lines and hoping that, with Giorgio Chiellini’s injury-enforced absence, a little of Juventus’s resolve has softened.

Back in 1973 Ajax beat Juventus 1-0 to win their third European Cup in a row; 1996 remains a hotter topic and reared its head in the buildup when David Endt, who worked as their media director and general manager, suggested to an Italian radio station that Juve were “maybe a bit doped”. It is a view that has been expressed by others, but one the Turin club have consistently rejected and he has subsequently backtracked. The comments did not go down well and, if any antagonism does surface on the night, it will at least be a reminder that the mere fact of this fixture never used to elicit such surprise.

Ten Hag, hearing that Jordi Cruyff had praised his team’s style, said Ajax need “to conquer hearts again”. They are doing that and it could hardly be a more timely antidote to the far greater struggle they face.

Meanwhile Cristiano Ronaldo has recovered from a thigh injury and is expected to start tonight’s game. “Cristiano has trained with the group and is available to the team,” said the Juventus coach, Massimiliano Allegri. “Tomorrow (Wednesday) he will be there.” The 34-year-old, who scored a hat-trick against Atlético Madrid in the last 16, had missed the last fortnight after picking up the complaint on international duty with Portugal. Daniele Rugani will replace Giorgio Chiellini, who hurt his calf on Monday, at centre-back. Juventus have not won the Champions League since beating Ajax in the 1996 final and Allegri predicted an “open match” that he feels is unlikely to finish goalless.