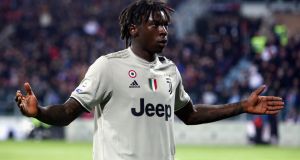 Moise Kean of Juventus celebrates his goal against Cagliari at Sardegna Arena where he was subjected to racist abuse. Photograph: Enrico Locci/Getty Images

Bonucci claimed Kean (19) should shoulder 50 per cent of the blame for the abuse he suffered during a Serie A match against Cagliari earlier this week.

The teenage forward was targeted by a section of the Cagliari support in Sardinia, and reacted by holding his arms aloft after scoring his side’s second goal of a 2-0 win.

Bonucci has since issued a clarification of sorts, saying he was “clearly misunderstood” and was “too hasty” with his post-match comments.

Allegri, who was himself criticised for saying Kean should not have celebrated scoring against Cagliari in the manner he did, tried to set the record straight at the club’s press conference on Friday.

“Racism must always be fought against and is never justifiable,” Allegri told the club website.

“With his mind still on the game, post-match, Bonucci expressed himself badly but realised this and apologised. These two things are distinct.”

Allegri was speaking ahead of his side’s match against AC Milan at the Allianz Stadium on Saturday evening.

Juventus will wrap up their eight successive Serie A title if they win and nearest challengers Napoli lose at home to Genoa.

Next week, Juve will turn their attention to the opening leg of their Champions League quarter-final tie against Ajax in Holland.

“When the Scudetto is won we should celebrate,” added Allegri, who will be boosted by the return of Mario Mandzukic, Paulo Dybala and Leonardo Spinazzola. “Winning eight titles in a row isn’t easy. We are doing something extraordinary.

“I don’t think that the Scudetto will be decided this weekend. However, it will be 15 intense days ahead of us, but the team is going well and we are ready to play the final part of the season.”

Milan head to Turin having lost in each of their last seven visits to Juventus.

Gennaro Gattuso’s side are just four points clear in the race for the Champions League spots, and have lost two and drawn one of their last three appearances.

“Juve are a team who have already won the league and they’ve only lost one game,” said Gattuso.

“They have the mentality, and they are really strong, but we have everything required to play a great game.

“We can do it, a positive result could be a real turning point. We need something to happen to bring us back to life.”