‘In theory, it is sacrilege,’ to call the Barcelona player God, according to the Catholic Church 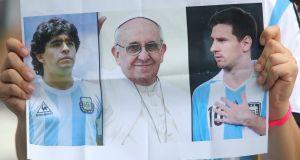 A picture of Diego Maradona, Pope Francis and Lionel Messi is held up by an Argentina fan ahead of their last 16 match against France at the 2018 World Cup. Photo: Alexander Hassenstein/Getty Images

For Barcelona fans, Lionel Messi is ‘D10S’, a combination of the Spanish word for “God” - “dios” - with the No 10 on his shirt. But Pope Francis begs to differ.

Interviewed by Spanish TV channel La Sexta on Sunday, the pope praised his Argentine compatriot Messi, but said he must not be called God.

“In theory, it is sacrilege,” explained the leader of the Catholic Church. “You can’t do it.

“People could call him God, just as they might say ‘I adore you’, but only God can be worshipped.

“(Saying) ‘He’s a god with the ball on the pitch’ is a popular way to express yourself. He’s great to watch - but he’s not God.”

Pope Francis is known to be a football fan, and he is also a club member of Buenos Aires side San Lorenzo.

Two goals from Messi gave Barcelona victory in the Catalan derby over Espanyol on Sunday, taking the La Liga leaders another step closer to the title.