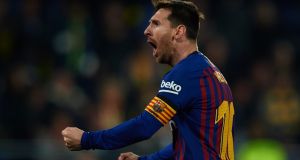 Barcelona coach Ernesto Valverde refused to excuse his side’s dependence on Lionel Messi after the Argentina international came off the bench to spark a dramatic late comeback against Villarreal.

Trailing 4-2 in the 90th minute, Messi fired home a free-kick before Luis Suarez equalised with the last kick of the game.

Valverde had chosen to rest Messi ahead of Saturday’s visit of second-placed Atletico Madrid, which is followed by a Champions League quarter-final against Manchester United.

“Of course there is ‘Messidependence’,” Valverde told a press conference.

“It would exist in any team in the world, but when he is not there we also have to play and try to win.

“Leo is fundamental for us and marks the style, it is well known that he is the best in the world for something.”

Barca will take an eight-point lead into this weekend’s game against Atletico but their manager admitted the match against Villarreal proved to be a wake-up call.

“It shows that the league is not won,” he added.

“I have the feeling that this match can help us a lot in the face of what is coming.

“It’s very big because we were losing and now we will face Saturday’s game with another sensation, of having come back from two goals in the last minutes.

“At the beginning we could even have made it 3-0 but they are a dangerous team and the game went out of control.

“Atletico is a rival who will never give up. We are not surprised and we will find this difficulty (against Villarreal) in all the remaining matches.”