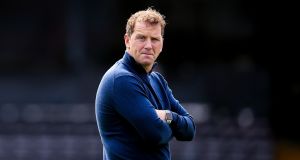 Uefa had whittled Dundalk’s possible opponents for the one-leg tie down from 16 to four by the time of Sunday morning’s draw in Nyon.

It so happened they were drawn away to one of the two teams based in countries not currently on the ‘green list’ of nations that quarantine isn’t required upon travelling from.

Of the neutral countries Uefa have listed as potential hubs due to Covid-19 restrictions, only Greece and Hungary feature on the green list and the latter has been selected by the home team.

“As the Irish would have difficulty returning home from Celje during the Coronavirus period, the match will take place at the Szusza Ferenc Stadium in Újpest, Hungary on Wednesday, August 19th at 7pm.”

Uefa are providing a travel grant to subsidise Dundalk’s cost of chartering a flight.

On the pitch, NK Celje last month clinched their first-ever title at the end of a resumed campaign and are due back to face domestic cup holders NS Mura in the first game of the new season this coming week.

Although they were unseeded in the draw, the Slovenian league is ranked 32nd in Europe, 10 places above Ireland. Croatian under-21 striker, Dario Vizinger, is considered their main threat.

Dundalk’s Nathan Oduwa knows all about the calibre of opposition following his time in the PrvaLiga.

“During my time at Olimpija Ljubljana, Celge were like our bogey team, especially when we played them at home,” he told the club’s website in reaction to the draw.

If the Lilywhites get knocked out, they are guaranteed a back-door entry in the Europa League.

They will learn their potential second qualifying round opponents on Monday, as will Ireland’s representatives in the Europa League - Shamrock Rovers, Bohemians and Derry City.