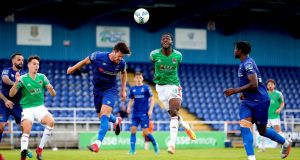 Cork City remain rooted to the bottom of the League of Ireland Premier Division table after failing to score for the sixth time in seven matches this season.

By the end of Saturday’s stalemate at the RSC, they were fortunate to take a point off Waterford, whose Will Fitzgerald squandered a late sitter after they were also denied a stonewall penalty.

Immersed in a relegation battle before the lockdown, Cork lost 1-0 to Bohemians on the restart last Sunday before firing another blank in this first-ever behind-closed-doors Munster derby.

Neale Fenn’s side have now gone a full 12 months without scoring away from home.

While Cork will have new strikers Connor Simpson, Scott Fenwick and Kit Elliot available soon following quarantine, it was the team’s lack of creativity from midfield and wide areas that appears more problematic.

For Waterford, off field issues remain in the spotlight.

The results of our second suspected case of COVID-19 has been returned negative. All club activity will now be restored.#WaterfordFC #Blues

Although this point adds to the three John Sheridan’s side sealed against Shelbourne last week, he refused to fulfil post-game media duties.

Their fixture against Sligo Rovers on Tuesday had to be postponed due to a player displaying flu-like symptoms 36 hours beforehand.

On Saturday evening it was announced the second of two Waterford players who had showed Covid-19 symptoms had returned a negative test.

That Sinéad Fitzpatrick resigned after five years as the team doctor on Wednesday didn’t help in calming the situation around the first suspected coronavirus cases in Irish football.

Following a drab first half, in which Matt Smith’s rising shot over the bar for Waterford marked the best chance, both sides went close soon after the restart.

Then, on 52 minutes, City substitute Dylan McGlade left Blues goalkeeper Brian Murphy rooted to his line with a cracker that rattled the crossbar.

Sheridan’s side should have nicked another three points in stoppage time.

Smith’s persistence paid off as he headed the ball across the six-yard box but substitute Fitzgerald’s shot proved tame enough for O’Connor to hack off the line.

“I thought we deserved a point but we’ve got to strengthen our attacking options,” admitted Fenn afterwards.