Antonio Conte says ‘something incredible’ on the cards at Camp Nou 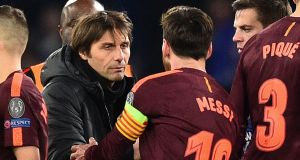 Antonio Conte believes Chelsea can still achieve “something incredible” at the Camp Nou after emerging disappointed only to draw with Barcelona in the first leg of their Champions League last-16 tie.

Willian’s well taken goal had squeezed Chelsea, the more threatening side, a lead only for Andreas Christensen’s rare mistake to present Barça with an equaliser 15 minutes from time. It was Lionel Messi’s first goal against these opponents at the ninth attempt and handed the unbeaten leaders of La Liga the advantage in the tie, with Ernesto Valverde’s side having won all their home games in Europe to date this season.

“We paid dearly for one mistake because we were very close to playing the perfect game,” said Conte, whose side now face daunting Premier League matches at both Manchester clubs. “But, against this quality of opponent, if you make a mistake you pay. At the end of the game we are disappointed with the final result. But, at the same time, this game must give us a lot of confidence to trust that, in the second leg, qualification is open.

“It won’t be easy, we must be realistic because we are talking about Barcelona, and they showed they are a fantastic, strong team tonight. But we showed, too, that if we work very hard together defensively, but at the same time win the ball and create the chances to score, we can try to do something incredible at Nou Camp.”

Cesc Fàbregas praised the head coach’s tactics – Willian struck the post twice before easing his team ahead – but urged his team-mates to be ruthless in the return. “We have showed that we can compete and we will need another excellent performance at the Nou Camp to go through,” he said. “You have to have a lot of personality to play against a team who have 70 per cent of the ball. We have to go there to attack and score because 90 minutes defending at the Nou Camp is an eternity, it is a suicide mission. We have to play our game.”

Yet Conte will expect the players to follow the prescribed gameplan in Catalonia. “If you want to face Barcelona box to box, you are crazy,” he added. “You’ll go on to lose the game 4-0, 5-0, 6-0, so you must be intelligent. My players are not stupid. They followed the programme we prepared and understood the plan. A coach can have a fantastic plan but, if the players don’t believe in this plan, you are dead. But my team were excellent. Barcelona were fighting so hard to create a chance, and then one mistake opened us up.”

Barça, too, will be wary of the threat Chelsea will pose. “We know it will be difficult because they are playing for their season,” added Andrés Iniesta. “They are one of the best teams in Europe, they have great players and this is the Champions League. In this competition any move or mistake can cost you a lot.”