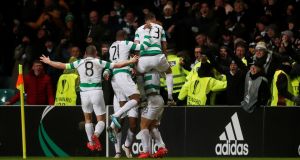 Brendan Rodgers would have taken this narrow Celtic lead over Zenit St Petersburg. From the manager’s own musings, he perhaps did not really expect it. To the credit of Rodgers and his team, this was a mature and effective performance that drew a merited victory.

The odds may still be against Celtic progressing to the last 16 – Zenit will be confident at home – but at last Rodgers was provided European evidence of an improving team. Celtic were dangerous and patient in attack while displacing defensive obduracy as doubted by many. Celtic’s vast number of injuries mean even more praise is due. Rodgers, and his squad, provided sharp responses to some lingering doubts.

That Celtic dropped into the Europa League from a Champions League group which also included Bayern Munich and Paris St Germain was rightly heralded as perfectly acceptable. Nonetheless, there were some heavy wounds inflicted before Christmas; including a lame home defeat to Anderlecht which rounded off the section.

Rodgers had been effusive in his pre-match praise of Zenit. The motivation for that seemed twofold, Celtic having been well short of their best in recent times and the team currently second in the Russian league retaining spending power far in excess of the Scottish champions. Celtic hope, boosted by a strong opening here, resonated mainly in Zenit’s current position of being involved in a winter break.

Olivier Ntcham should have emphasised the hosts’ early superiority but instead slammed wide. Celtic’s support – which, impressively, packed this arena for a last-32 tie – had been provided suitable incentive that an inauspicious recent home European run could be brought to an end. That Rodgers would deploy a more pragmatic approach than has been common when seeking to do precisely that was illustrated by Scott Sinclair’s position among the substitutes.

That foray aside, Zenit played the opening half hour in a style befitting a team lacking competitive action. Callum McGregor was the architect of a glaring Celtic chance, his ball across the face of goal somehow managing to elude all team-mates. Moussa Dembélé was the next Celtic player to bear down on the Zenit goal with Emanuel Mammana delivering an outstanding tackle to deny the Frenchman.

Fascination attached to the start of the second period surrounded whether Zenit had any interest in offering more in attack and whether Celtic could add the goal their overall play had hitherto merited. Having not played a league fixture since December 11th, the notion that Zenit may tire appeared a valid one.

Zenit successfully dulled Celtic’s impetus, save a James Forrest shot that drew a fine block from Mammana. Dembélé, while industrious enough, was not being supplied with regular scoring opportunities. Eboue Kouassi, a surprising choice in the Celtic midfield, attempted to reinvigorate his team with a long-range attempt which Andrey Lunev batted away unconvincingly.

With half an hour to play, Zenit appeared perfectly content to settle for scoreless parity. Celtic were probably in a state of uncertainty over whether that would represent a decent outcome.

Rodgers’ quest to return pressure to the Zenit defence during the closing stages meant replacing Kouassi with the Chelsea loanee Charly Musonda. The move was to prove an inspired one. How Musonda revelled in his arrival.

The 21-year-old’s arrival in Glasgow was, presumably, for occasions such as this rather than the annual forgone conclusion that is the Scottish top flight. Musonda was deployed in close support of Dembélé, with the substitute’s first act to draw a booking for the baffled Igor Smolnikov. Musonda’s next move was the crucial one, a terrific run and one-two with Dembélé who in turn supplied McGregor. The midfielder lashed home from a hardly straightforward angle; Celtic deserved both their celebrations and advantage.