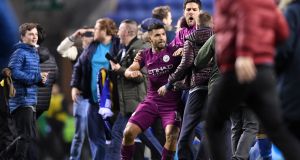 Sergio Agüero of Manchester City is surrounded by fans as he attempts to leave the pitch after the FA Cup match against Wigan Athletic at DW Stadium. Photograph: Gareth Copley/Getty Images

Wigan put in the doughtiest of defensive performances to pull off the shock of the season against Manchester City and once again breathe life into the FA Cup, though this eventful evening was old-fashioned in an unsavoury sense too, with scenes at the end resembling the dark days of terrace hooliganism from 40 years ago.

There was an old school pitch invasion at the final whistle, which might not have been so bad had the players been allowed to leave the pitch safely. They were not and Sergio Agüero was most conspicuously involved in an unseemly scuffle with fans in which a couple of punches were thrown.

Then the City fans in the stand began throwing objects over the perimeter fence and by the time order was restored on the pitch they were ripping up advertising hoardings and flinging them towards stewards and police.

The opposing managers, Pep Guardiola and Paul Cook, were also involved in a confrontation in the tunnel at half-time, disagreeing sharply over the red card issued to City’s Fabian Delph on the stroke of the interval.

“The dismissal gave us a massive lift,” the Latcis manager said later. “It was a huge factor in the game and I thought the referee got it right.”

Went to the city match absolute disgrace behaviour from the fan on aguero @b1g5te yet all the tv are showing is aguero going for him. pic.twitter.com/9JclOUByKL

Guardiola did not disagree afterwards, even though his reaction at the time suggested he was incensed at the decision. “It was a red card,” the City manager said. “The referee decides what he decides.”

Neither manager wanted to speak about the ugly scenes on the pitch at the end, both claiming not to have seen the Agüero incident, but it seems highly likely that Wigan will face an FA charge for demonstrably failing to control their supporters and City are understood to be considering a formal complaint over their players being placed in danger.

Even that is unlikely to overshadow the footballing events on the pitch, however, as Wigan knocked City out of the competition for the third time in six years. This must count as the biggest surprise of the lot, as City are so far ahead at the top of the Premier League and the hosts are now in League One.

“A lot of things happened in our favour, but we dug in, worked hard, and some of the blocks we made were tremendous,” Cook added. “I think we earned our bit of luck, and you certainly need that against City. They are an outstanding team, great to watch and they represent football in a really good way.”

His chairman David Sharpe added: “It was a massive result, but we have to stay classy in football, I didn’t like what I was seeing there at the end of the game.”

Cook, Sharpe and Wigan can now look forward to a home quarter-final against Southampton, something they had not really been considering before this result. “When the draw was made I don’t think we even texted each other about it,” he said. “It was like we weren’t in it, but we certainly are now.”

Guardiola was disappointed, but did not try to claim the dismissal had been a decisive factor. “I don’t think it was, we played well in the second half,” he said. “We created more than enough chances to go through, but in the end the result speaks for itself. We didn’t score any goals and Wigan did.” – Guardian service