Celtic get back on track with win over Motherwell 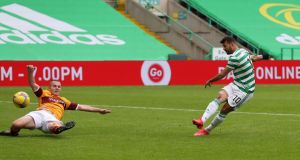 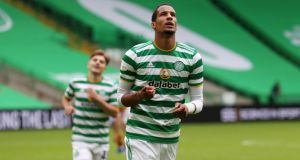 Celtic demonstrated their domestic prowess once again by eventually overcoming Motherwell 3-0 at Parkhead.

The Hoops were knocked out of the Champions League qualifiers by Ferencvaros on Wednesday night and were again unconvincing before winger James Forrest scored five minutes before the break.

The Steelmen, who had failed to win any of their first five league matches, had been tenacious and remained so in the second half until Albian Ajeti fired in a second in the 74th minute, just a few minutes after coming on as substitute, with defender Christopher Jullien netting a third in stoppage time.

In the final analysis Celtic, aiming for their 10th successive title, had too much for their Premiership opponents as they moved to within six points of Rangers with two games in hand.

Boss Neil Lennon was critical of some players after the defeat to Ferencvaros but he named an unchanged side which again had no recognised striker, Ryan Christie moving from midfield to lead the line once more.

Strikers Patryk Klimala and Ajeti were again on the bench along with midfielder David Turnbull, who made the switch from Motherwell to Celtic in midweek for a reported fee of around £3.25million.

Midfielders Mohamed Elyounoussi and Olivier Ntcham both had early efforts but it was a tentative start by the home side and Motherwell slowly grew in confidence.

In the ninth minute wing-back Liam Grimshaw’s shot on the turn from inside the Celtic penalty area was turned behind by Hoops keeper Vasilis Barkas for a corner which came to nothing.

In defence the Steelmen looked disciplined and organised and it looked like they would get to the interval with their goal intact but then Forrest struck.

Celtic swept up the park and, when the Scotland winger took a Callum McGregor pass at the edge of the box, defender Ricki Lamie stood off and allowed him to bury a shot from 16 yards behind keeper Trevor Carson for his first goal of the season.

Seconds before the break Barkas blocked an angled drive from Watt following a cross from Stephen O’Donnell but again the corner came to nothing.

Polish forward Klimala replaced Elyounoussi for the start of the second period to give the Parkhead side a more natural focal point with Christie moving wide.

Just before the hour mark, with Celtic bossing possession, Klimala could not get properly on the end of an enticing Greg Taylor cut-back.

Taylor was then replaced by right-sided Jeremie Frimpong as Lennon changed to 3-5-2 formation, Christie moving back into the centre with Klimala and Forrest switching to the left.

Ajeti replaced Ntcham to partner Klimala with Christie taking over from the Frenchman and, at last, Celtic had two natural strikers up top and it was the unmarked former West Ham striker who grabbed Celtic’s second when he took a pass from Kristoffer Ajer and hammered a shot from 12 yards past the helpless Carson.

Klimala then had a one-on-one with Carson with the keeper saving with his feet before Forrest clipped the top of the bar with a drive and in added time Jullien accepted a pass from Frimpong and rolled his shot past Carson.

1 Ken Early: Handball ‘crisis’ a timely distraction from the grim bigger picture
2 The Offload: Springbok heavyweights heading for Pro14
3 All in the Game: No sympathy from Bruno Fernandes
4 GAA Championships await and we need a button for the buzz of the crowd
5 Lewis Hamilton: ‘They’re trying to stop me, aren’t they’
Real news has value SUBSCRIBE
Crossword Get access to over 6,000 interactive crosswords