Brave Blossoms forced to withdraw due to Covid-19 logistics, Springboks now lined up 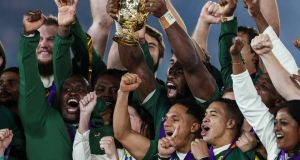 World champions South Africa are being lined up to replace Japan in the end-of-year Eight Nations Tournament.

Bernard Laporte, the World Rugby vice-chairman, has confirmed that the Brave Blossoms will not be taking part in the event that is to replace the customary autumn tours that have been abandoned because of the coronavirus pandemic

Logistical issues resulting from Covid-19 have forced Japan to withdraw, but South Africa could plug the gap left in group two that is currently filled by Scotland, Italy and France and needs a fourth nation.

“The Japanese will not come to Europe. We are looking for a nation to replace them,” Laporte told media in France.

“We are in advanced discussions with South Africa. It would be great to be able to face the Springboks, world champions, but it’s not yet done.”

Group one comprises of England, Wales, Ireland and Fiji with the pool winners scheduled to face off in a final at Twickenham on December 5th.