Connacht too sharp for Ulster in bonus point victory 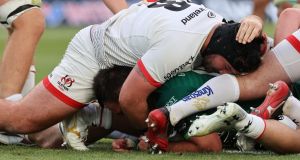 Connacht were fired up for their first outing at Irish Rugby HQ since 1989 and it handsomely paid off with the scalp of a disappointing Ulster. Well deserved too for a more creative, high tempo Connacht performance than the ‘visitors’ in their first game back.

In Ulster the competitive hiatus showed with some predictability and average execution contrasted with a zesty Connacht side that ultimately made better individual choices.

From kicking for an attacking lineout at the tail end of the match when leading by one point (when they scored their fourth try), to the lovely lateral kick along the ground from fullback John Porch in the first half for their second try - Connacht looked the sharper all around the pitch.

All that gloom and it was Ulster who put the first points on the board after six minutes. A typically robust turnover at the breakdown from their powerful number eight Marcel Coetze set up scrumhalf John Cooney from mid distance and the first penalty of the match sailed over for 0-3.

Connacht, who despite less territory and possession in the early stages, looked the bigger threat going forward and it took just minutes before they were showing Ulster just how important it was to hurt opponents when up in their red zone.

It took a piece of calm thinking in heavy traffic from Jack Carty to do just that. Swallowed by a couple of Ulster defenders deep in the Ulster 22 Carty simply raised his arms when the Ulster defence thought they had him bagged. Instead basketball style Carty placed the ball in the hands of fullback John Porche, who ran in under the posts for the easiest of tries. Carty nailed the conversion for 7-3.

While Cooney responded with another penalty for Ulster to keep in touch at 7-6, the most creative move of the match again thrust Connacht into the lead. Following some strong approach from Connacht left wing Alex Wootton, the ball ended up in the hands of man of the match Porch galloping down the left.

On the run and without breaking step, Porch flicked the lightest of kicks inside and on the ground flummoxing the Ulster defence and, better still, into the hands of a grateful scrumhalf Kieron Marmion, who touched down. With Carty’s conversion Connacht led 14-6 mid way through the first half.

Ulster had already been hit by a late withdrawal when Ireland hooker Rob Herring withdrew just before the match and Adam McBurney came into start. It was in fact the replacement hooker, who had Ulster’s best opportunity to get a first half try.

With Ulster awarded a penalty on 36 minutes outhalf Billy Burns kicked for touch to set up the attacking lineout. The heavy push went in and Connacht slid backwards with McBurney diving in at the back. But amid some confusion the try was not awarded allowing Connacht to head into the break 14-6 ahead.

Shortly after the break Gavin Thornbury went off with a nasty HIA and ended up in hospital before Jacob Stockdale took a skip pass and muscled in for Burns to convert and bring Ulster to within a point and14-13.

But from that shift of momentum Ulster never kicked on. Less than five minutes later centre Bundee Aki barrelled up straight and in under the posts. Carty converted and Connacht held a 21-13 lead. It was an advantage which they would not relinquish.

Dubliners Nick Timoney and an Ian Madigan combined for a try and conversion respectively and did get Ulster back to 21-20 on 62 minutes. Then Connacht went down a man for eight minutes and still a flat Ulster could not take advantage.

“I personally felt that game was lost last night on the sofa watching Glasgow losing,” said a disgruntled Ulster head coach Dan McFarland. “A little bit disappointing but we were a shadow of our normal selves.

“I don’t want to take away from Connacht but it was slightly unexpected. We had no pre-season game but you watch Leinster turn up in a game last night that had no meaning and I thought they were a lot closer to the money than we were.”

The final Connacht cut came a minute from the end as they cleverly played in the Ulster half. Choosing to kick a penalty to touch Connacht again went through the phases with replacement prop Jack Aungier grabbing the late try for a welcome 26-20.