Pros and cons: Dion O’Cuinneagain on professionalism, then and now 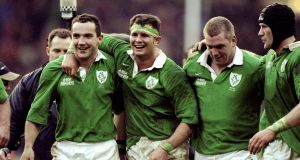 Professional rugby, having turned 25 this week, remains at a perilous crossroads. The British and Irish Lions tour of South Africa in 2021 has never felt so relevant. Will it happen? Should it happen? What about the travelling hordes?

Dr Dion O’Cuinneagain – Ireland captain after Paddy Johns and before Keith Wood – casts his eyes into the future of a young sport by reflecting on its past.

Syd Millar – the legendary Ulster, Irish and Lions prop, coach and manager – accepted quicker than others in the IRFU that the amateur era had passed and Ireland needed a beacon of professionalism. So Millar recruited O’Cuinneagain during the 1997 Lions tour. At that moment in time this super athletic South African born and bred flanker was still eyeing up a Springbok jersey.

“Well I always followed Ireland because of my dad,” says O’Cuinneagain from his medical practice near the wine fields of suburban Cape Town. “Syd came for a chat and asked ‘Where are you in the pecking order?’ I said I am in the top eight but certainly not the top four.

“Alan Solomons was assisting Springboks head coach Nick Mallett and I knew him very well so I asked for his advice. ‘I would not even think about it,’ said Alan, ‘go have a life experience playing rugby in Ireland.’

“John Mitchell had already been on to join Sale and Donal Lenihan told me I would have to earn my place in the Ireland team – there was no golden ticket – but they would come and watch me play.”

In the end, having been fast-tracked all the way to the captaincy, O’Cuinneagain became the chief martyr of Lens in 1999.

The son of a dentist from Enniscorthy and English mother, he knew his days as a player were limited due to his true calling: medicine. Almost as quick as he arrived, the first truly professional Irish rugby player was away home (Declan Kidney ensuring a brief Munster epilogue in 2001).

Gavin Cummiskey: How is Cape Town coping with Covid?

Dion O’Cuinneagain: “South Africa has one of the hardest lockdowns because we have such a vulnerable population with the townships.

“Our practice has had well over 250 patients who have been sick and, thankfully, only one death. It has been pretty well run in our area but I live in Constantia, a more privileged neighbourhood than some of the vulnerable areas.

“We kind of feel like we are coming out of it now. There has definitely been an easing of restrictions and return to some sense of normality.

“There is talk of international travel being allowed in November.”

GC: Have the townships really suffered?

DO’C: “Not as bad as they thought. For a population of 55 million there has only been – ‘only’ is such a terrible word – 13,000 deaths compared to a similar population like the UK where there are over 40,000 deaths.

“I think they were well prepared for it because in South Africa we live with certain epidemics all the time – HIV, TB, malaria.

“I do think the Lions tour will go ahead but we are such a long way off being able to accommodate 30,000 visiting supporters.”

GC: It’s 25 years since the game turned away from amateurism, is rugby union on the right path?

DO’C: “I am very excited by the prospect of South Africa joining the northern hemisphere game.”

GC: Not the Southern Kings?

DO’C: “The Stormers, The Lions, The Sharks and The Bulls. Same time zones, easy flights over night, easy for spectators to move between the countries, it would be a fantastic product.”

GC: As a doctor, how dangerous has the game become?

DO’C: “We have done some sports science studies on this: bone structure gets stronger, muscle mass gets bigger, players get faster but the one thing that does not change is their ligaments do not get stronger. That is why you see so many bad knee or shoulder injuries.

“Unless there is a Covid every five years – and players can rehab injuries – you are not going to have longevity any more.”

GC: Looking at the Springboks squad from 1995 – six have died young, including Joost van der Westhuizen, and Andre Venter is paraplegic – what do you make of that?

GC: Does the spectre of doping concern you?

DO’C: “There is definitely doping in rugby and we all know that. I think South Africa works very hard. I mean they even do testing at schools level to try and keep the game clean and identify culprits. But I think it is a worldwide problem, not just limited to South Africa.”

GC: But doping seems like a cultural issue in South Africa. You hear stories of parents helping their sons to purchase and inject steroids because the professional contract is such a lucrative opportunity. Is this being addressed?

DO’C: “Yeah, I think it definitely is. I know schools that do tests on their first teams. But it depends on the culture of the school. Certainly, in the southern suburbs, English-speaking areas, I think there is a gentlemen’s agreement between all the schools that if one season your number eight was 90kg and he trots onto the field at 110kg with muscles popping out of his ears the following season, the headmaster from the opposing school is going to call the headmaster and say ‘Can we just have him tested?’

“I do believe 10 years ago it was worse than it is now. SA Rugby have put a lot of effort into cleaning it up.”

GC: The game officially stopped being amateur in 1995 but, in reality, how long has professionalism existed in South Africa?

DO’C: “There were certain players getting cash for games. It wasn’t structured like a normal salary – where you get a monthly pay cheque – but if you made the team you got an envelope which was part of the gate or bar takings.

“That had been around since 1991, when I started playing senior rugby in South Africa. My impression is it was the same in some clubs in Ireland and France.”

Post apartheid South Africa, New Zealand and England could instantly unveil professional structures. This was in stark contrast to the Ireland set-up O’Cuinneagain became an integral part of when capped at the Battle of Bloemfontein in June 1998.

DO’C: “After ’95 Francois Pienaar was heavily involved in the attempted Kerry Packer series with all the top players in Australia, South Africa and New Zealand. We all got approached for that.

You could write a book about O’Cuinneagain’s first two caps. The naked violence up and down the pitch, and that’s before Trevor Brennan and Peter Clohessy came off the bench.

DO’C: “That Irish team was a very tight bunch of guys. It was like a club side. We weren’t going to back down in a Test match.

“It was quite funny standing at the back of the first lineout. I played Sevens with Andre Venter – who is now unfortunately in a wheelchair – and he just punched me. I remember swearing at him in Afrikaans, telling him something about his mother.

“For the rest of the game Andre chased me, he forgot entirely about the ball, which was good for us.

“After the first Test Paddy Johns decided he was not going to stand back from anything. From the opening whistle he went at Mark Andrews and Gary Teichmann. It just kept going from there.”

Gatland passed the Ireland captaincy to O’Cuinneagain for the 1999 tour of Australia as Johns was no longer guaranteed his place due to the rise of Jeremy Davidson and Mal O’Kelly.

DO’C: “The year before Woody had had a little bit of falling out with the IRFU over image rights and I think he didn’t particularly want the job. My impression was it was a decision by the senior players – people like Conor O’Shea, Peter Clohessy, Keith and Gatty – to give it to me.”

The formal conclusion of the amateur era was when Ireland got knocked out of the ’99 World Cup by Argentina in Lens.

DO’C: “There was a complete restructuring. It became about looking after the players. In South Africa, take Stellenbosch University where there are 1,200 senior players, it is like a kid in a toy store. If you get bored of one player you go get another. You don’t have to develop or coach them because there is so much talent coming through.

“In Ireland every player gets coached and conditioned. The investment in players has paid dividends.”

O’Cuinneagain joined Ulster – he remains close friends with Millar’s son Jonny – but his body was broken up.

DO’C: “I remember that first season in England, between Sale and Ireland I played 47 games. It was insane.

“I also stopped my medical studies after fifth year to come over. I had a very accommodating dean of medicine. Every year I’d write to him ‘Dear Prof, I just need one more season . . . ’ When it got to four years he said: ‘Come back now or you’ll have to restart.’ I had a broken wrist so I went home.

“When I finished my degree Declan Kidney brought me over to Munster as European cover. I played two games.

“After that my wife was ready to practice law. There was another contract on offer in Ireland and Brendan Venter wanted me to come to London Irish so we had a choice. But it was the right time to start our careers.”

GC: So rugby clocks up the quarter century. What does the good doctor see on the horizon?

DO’C: “I think it will become a better product. It is the modern day gladiator sport. The athletes are getting bigger and faster, with that more money will get dragged into the game.”