Fergus McFadden in race against time to add to Leinster caps 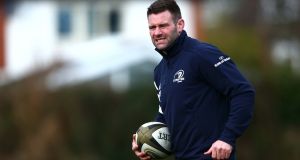 Fergus McFadden has suffered a calf injury that could rule him out for up to six weeks. Photograph: Tom O’Hanlon/Inpho

Ireland international Fergus McFadden may struggle to again play for his club side Leinster following Monday’s announcement of a calf injury which will keep him sidelined for up to six weeks. His hopes of appearing at least one more time now lies in the balance.

McFadden signed a short-term contract extension in June along with Irish fullback Rob Kearney that would have allowed him see out the 2019-2020 club season and is now due to end in September because of disruption caused to the calendar by Covid-19.

Leinster’s unbeaten Pro 14 campaign resumes following almost five months of a break this weekend against Munster in the Aviva Stadium on Saturday night (7.35pm), and is expected to conclude over the next four weekends, meaning the 34-year-old could miss it all.

“Yeah it was, it was devastating to see him go down in training last week,” said Leinster scrumhalf Luke McGrath. “But he seems pretty positive, the rehab is going well. I know it’s still quite early and I know he’ll be gone for a couple of weeks at least. He’s such a positive person and yeah, it is difficult for him, but he’ll be back soon, hopefully.”

The official Leinster injury news said up to six weeks with coach Felipe Contepomi, in understatement, calling it a “bad luck injury”.

“We hope he can get back but at the moment he’s making good progress but it’s a bad injury . . . it’s a bad luck injury,” said the former Argentinean outhalf. “Because he was really looking very good and sharp. But yeah hopefully he’ll get back before the contract is over.”

Conor O’Brien was another player hoping to figure more prominently after centre Joe Tomane moved to Dragons over the summer. Tomane, 30, who is of Samoan and Cook Islander descent, was born in New Zealand but moved to Brisbane as a child and had a spell playing in France before playing with Leinster for two seasons.

However, O’Brien had a procedure last week on a long-standing hamstring issue and is expected to be unavailable for a number of months.

“Yeah he’s doing well. he’s at home in lockdown but it will be a few weeks for him to get better,” said Contepomi. “Again an injury that happens sometimes in pre-season. Hopefully he can get back stronger.”

Peter Dooley is expected to return to training this week after a shoulder injury, while Vakh Abdaladze is unavailable for selection. He is due to have a procedure this week on a long-standing back issue with more clarity expected on his return to play time following the procedure.

Ireland flanker Dan Leavy will progress his gradual exposure to rugby training this week as he recovers from his knee injury with Adam Byrne (hamstring) and James Ryan (shoulder) remaining on the long-term injury list.

Leinster see the challenge as this weekend as one of weirdness as much as anything in the Aviva stadium. Following The government-imposed ceiling of 200 people in the almost 52,000 capacity arena, the shortlist of the numbers of personnel involved this weekend breaks down as follows.

“It’s a big challenge. It’s a new or strange situation and I think it will be a challenge,” said Contepomi. “So we can only imagine how it will be because we’ve never been through a situation of playing in an empty stadium before.

“I think we address it as best as we can and hopefully if we have to adapt to something on the day and then learn from it and get better for the following week. You’re allowed to have 42 personnel, with two bus drivers included, so literally it’s 40.

“Many of the backroom staff will have to do some things that other people would normally do on the matchday. Same for the players, maybe we won’t have the number of players we normally would have. Some won’t be there.”

Interest in Munster will settle around their two South African signings, centre Damian de Allende and lock RG Snyman. The hope is both players will be in Dublin, although that is not certain. Former Munster outhalf Ronan O’Gara called the pair the two biggest signings in world rugby this year and there wouldn’t be too many to disagree with that.

Contepomi, however, sees Munster as not a team of names in neon lights, although they have had their fair share over the years in All Blacks Christian Cullen and Doug Howlett, but a side with ethos and standards regardless of who plays.

“I think Munster is always Munster, always a strong team. It’s not about names, it’s more about Munster, for me at least,” he said.

“You can bring whatever names you want but you’re playing against Munster and they have such a culture and ethos behind them that it makes them a very tough team to beat.

“Definitely the signings probably would make them a better team as well. But sometimes it takes signings [time] to get into the rhythm and the culture and everything. Having said that I think we are more focused on what we can do and how we can improve because it’s been five months since the last game and probably they have gone new things they want to try.”

Jota forgets penalty miss to steer Liverpool past West Ham 20:08
Dean George bags a hat-trick as Athlone stun Shels 19:27
England lay down marker for Ireland after bonus point win in Rome 19:09
Dublin return from the dead to give Kilkenny a scare in Croke Park thriller 18:57
James McClean nets for Stoke as they beat Rotherham 18:35
Here is your handy guide to sport on television this week