Relentless Leinster make it 23 wins on the spin against Ulster 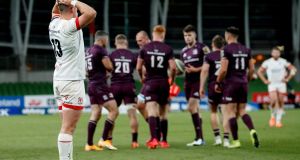 Leinster’s victory emphasised the importance of taking opportunities, both collectively and individually, as they racked up a 23rd consecutive victory that dates back to the tail end of last season. They accomplished it on foot of 15 changes to the starting team from the Munster win thereby guaranteeing an impetus heading into next Friday night’s Pro14 semi-final at the Aviva stadium.

One of those to grasp the opportunity was Leinster centre and man of the match, Ciarán Frawley, who adapted impressively at inside-centre, a role that he’s been fine tuning in training. He coped well on the gain-line with the physically imposing Stuart McCloskey while demonstrating his distribution and football skills, not least in the grubber kick which he re-gathered in the build-up to Ed Byrne’s try.

He explained: “I’ve been training a lot at 12 throughout our pre-season, building that cohesion with the players around me like Ross (Byrne) and Harry (Byrne); I did a bit with Sexto (Johnny Sexton) as well. It’s nice to be getting that telepathy with them and not just trying to the week of the game. It’s really enjoyable at the moment.

“It’s different with every 10 you play with. That cohesion is important, sometimes 10s play flat, sometimes 10s play deep and you have to judge your depth off them. It’s been great to get that understanding off the 10s in pre-season. You do have a lot more time but it’s definitely more physically demanding.”

Ed Byrne, captaining Leinster for the first time, celebrated with a try to cap a fine performance, while Will Connors, Ross Molony, Josh Murphy and Max Deegan, caught the eye for a variety of reasons. Jamison Gibson-Park was a lively presence while Ross Byrne controlled a game plan that was direct in orientation for the most part, with typical assurance.

A fundamental difference between the teams was Leinster’s superior protection of the ball in contact, something that their opponents periodically struggled with and a weakness that ultimately proved decisive in terms of the outcome.

The trappings of a home game for Ulster included a short burst of their anthem, ‘Stand Up for the Ulstermen,’ as they took the pitch but in an empty stadium it was exclusively down to the players to take up the challenge. There was integrity to the way the team eventually knuckled down to the task but the precision and fluency was fitful and undermined by errors and turnovers.

When Ulster did achieve some continuity, particularly after the interval, there was a potency to their attacking shape, with the excellent Jacob Stockdale a catalyst - he took a couple of bangs to a shin but should be fine for next weekend’s semi-final against Edinburgh - supplemented by direct carrying, while they also found some room on the edges.

However, spilling ball in contact and Leinster’s penchant for winning key turnovers at the breakdown scuppered their opponents’ best intentions. They did get back into the contest when trailing 16-0 with a well crafted Rob Herring try from a lineout maul, which John Cooney converted while also adding a penalty to close the gap to six points.

Later when trailing 21-10, Ulster looked to have clambered back into the contest once again when John Cooney intercepted Rowan Osborne’s pass and raced 65-metres for a try; it was disallowed for offside on the intervention of the television match official.

Ulster head coach Dan McFarland felt that the try should have stood. “I haven’t spoken to a single person who thought it was offside. I don’t understand how that was offside. I have watched every angle; he is on the back foot of the ruck.”

Leinster made the most of their reprieve by closing out the match with a third try, this time from replacement outhalf Harry Byrne, who had replaced his older brother, Ross. The younger sibling enjoyed an impressive 18-minute cameo, his vision and perfectly weighted diagonal kick the precursor to Scott Penny’s try on 73 minutes.

McFarland though was reasonably pleased with his team’s efforts. “There is a buzz and a zip to the way that we played; an intensity. We looked much more like the Ulster team that got us into this position, which is movement of the ball, running hard, finding the edges. We looked like that team against a really good defensive outfit.

“I was pleased with that. We just have to knuckle down and focus on understanding that simple errors really kill your ability to maintain pressure on an opposition.” He confirmed that Luke Marshall (hip) won’t be back in time for next Saturday’s trip to Edinburgh.

Leinster head coach Leo Cullen was pleased with his team’s commitment and the manner in which they grafted to ensure the win. He smiled when asked about Dan Leavy and James Ryan, both of whom took part in the warm-up.

“For Dan, it’s been a while since he’s been out running around on the Aviva pitch against Ulster; it was that (Champions (Cup) quarter-final where he picked up that injury so it was great to see him out there in the matchday warm-up. So those guys have made great progress so they’re not a million miles away. We’ll see how they go in the next couple of days.

“It means a lot to the players, they all want to be involved in these big games coming up; so overall that’s probably the most pleasing piece of the last two weeks.”

1 Andy Farrell hands Billy Burns first Ireland start against Georgia
2 ‘God is dead’: The world’s front pages remember Diego Maradona
3 Keith Duggan: Through the glories and the disgraces, we were all Maradona addicts
4 Rugby Stats: Blame game at lineout time is on the whole team
5 GAA Statistics: Can Cavan and Thomas Galligan beat Dublin with the long kickout?
Real news has value SUBSCRIBE