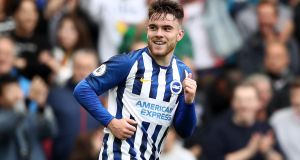 The list of players’ nationalities at Brighton’s academy is pretty typical by modern day Premier League standards. French, Swedish, Serbian . . . talented kids from across Europe and, in some cases, far beyond have been assembled on the south coast of England in the hope of producing stars. Brexit may well change everything but for the moment, at least, Ireland is well represented among the hopefuls and academy manager John Morling is a big part of the reason.

An English born ex-player who started out himself in Norwich City’s academy, Morling moved into coaching while still in his teens and started to forge his connection with Ireland while working at Peterborough.

He rattles off the names of players who were around the club when he was: Niall Inman, Mark McKeever, Dan Connor, Tony Shields, John O’Flynn, Killian Brennan, Sean St Ledger and Dave Billington. an implausibly large concentration of young talent from, or eligible to play for this country and whose presence inevitably led to contact with members of the FAI’s coaching staff, most prominently Brian Kerr.

“A few of them played for Brian back then and Niall was part of the group that came third at the World Cup.” Morling recalls now. “So I would have been in regular touch with Brian.

“I wrote to him when I was 21 or 22 and asked if I could come to see a session and he said no problem. I went to Belgium for an under-16 qualifier, paid all of my own expenses, but learned a lot and kept in touch with them after that.”

Having progressed to first-team coach at Peterborough, he applied for the manager’s job when Barry Fry moved upstairs but sensed he was too young to be seriously considered. At the same time, the FAI was looking to appoint someone to head up its new Emerging Talent Programme (ETP) and after being interviewed by Kerr and Packie Bonner, Morling was offered the role.

“We moved to Ireland and spent seven years there,” says the now 46-year-old whose second son, Cian, now playing with Brighton, was born here. During his time with the association, he subsequently managed the under-16 and under-17 national sides and he retains strong links to Ireland both personally and professionally.

Evidence of the latter is not hard to find. Aaron Connolly’s progress during the past year is the most obvious sign of the link but Morling’s belief in the potential of Irish young players is apparent at pretty much every level of the club’s development set-up.

Like Connolly, Jayson Molumby has made major progress since last summer, establishing himself as an influential regular while on loan at Championship side Millwall. Behind them Warren O’Hora, James Furlong and English-born Ireland youth international Matt Everitt are involved with the club’s underage teams. Andrew Moran and Leigh Kavanagh, both of whom have spent time with St Joseph’s Boys in Dún Laoghaire, will join this summer.

The reason Brighton keep coming back, he suggests, is the quality of the players but Morling believes that more could be done to develop them here and will have to be, really, if Brexit ends up restricting their ability to move at 16.

“There are good players there, there’s no question of that,” he says, “and very good people; good player developers in a lot of the clubs and leagues around the country. As well as at the FAI.

“If you are going to make a generalisation then football-wise the players we have now have done well, the players that we would have had with us over the last four or five years would have trained at a very high level.

“Probably less so now, but there would certainly have been a point where they would have been a little bit behind in terms of strength and conditioning, psychology, the stuff that comes with the support services that can be put in place around a young player at a Category One academy purely because of the resources that are available to us.”

On the actual playing front, he says, the ETP has helped clubs outside Dublin to narrow the gap on the better known schoolboy outfits around the capital but the difference can still be apparent when the players first tackle a training session after arriving Brighton.

“You can have a lad in Dublin who trains three or four nights a week, comes over and really doesn’t find much difference. You get another player from somewhere else in the country and who has been playing with a club that doesn’t have the resources of the big schoolboy sides and they haven’t trained like that. Here, an under-nine would be in three times a week, playing on a Sunday.”

Over time, the intention is that the varied back-stories matter less. The goal in every case is the same, to get them into the club’s first team, something that has become central to the club’s overall philosophy.

“The system here is set in stone by the board,” he says. “People ask what happens when a first-team manager goes but it’s simple: two of their staff go with them and everything else stays the same.

“That allows things to build at academy level; you have managers who get used to working together and developing something which is great because there is a very definite sense that what you’re trying to do is provide the board and the chairman with a return on their [multi-million pound] investment.”

He speaks positively of the key working relationships required to make the whole thing work, most obviously with technical director Dan Ashworth, first-team manager Graham Potter and some of those who have been and gone, notably Chris Hughton. The intention, he says, doesn’t change.

“We want 30 per cent of our players starting in the first-team’s fixtures, in every one. The closest we have come is 22.8 per cent but this year, if the season gets finished, we will be very close to 30 per cent, if not just above.

Connolly was the initial breakthrough this year and Molumby, he believes, can be “in the mix,” after having done so well at Millwall

“I don’t think people would be surprised by either of them. They have got their opportunity and now we all want to see how far they can go. The path for each player is different,” he suggests, citing the way in which coaches make calls together on whether it is best for a particular player to go out on loan or play for the under-23s (an unfairly maligned stepping stone, he believes, given the mix of opportunities it provides from league football against similarly talented young players to international tournament to cup football against lower league first teams).

“But it’s always the same, you want them hungry for more, to keep achieving more to become a little bit better.”

Brexit may change things, he acknowledges, with Fifa effectively getting to decide “whether there is one border or four” between what it regards as the five different jurisdictions across Britain and Ireland. But Morling remains positive about the potential to keep producing high-quality players here.

“Look at the under-21s at the moment. That’s one of the strongest groups they have had for a very long time. It says a lot about the work done at the different levels at the association and clubs to bring through those players and it bodes well for the future senior team but you need to keep increasing the resources,” he says.

“Look at what Iceland have achieved with a small population. Everyone can emulate that but it is down to coach development . . . player development. Brighton will continue to look to Ireland for players. We have a scout there, Leroy McCourt [a brother of Paddy] who does a great job, I am over a lot. It is doing a very good job but if the resources are put in then things could be even better.”

This is the sixth article in a new series focusing on youth development in Ireland. You can read each part in The Irish Times and on irishtimes.com/sport every day this week.