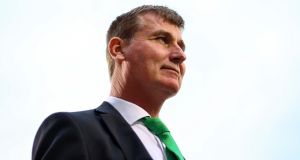 Stephen Kenny has said he will do things hiw own way as Republic of Ireland manager. Photograph: Tommy Dickson/Inpho

Though he concedes there can be no guarantees in terms of achieving the success he is hoping for, Stephen Kenny used his first press conference as Republic of Ireland manager to outline his vision for a team that aims high; one built on what he believes is one of the best back fours in Europe, controls games and creates more scoring chances. It will, he intends, be a team that inspires those who watch it.

The 48-year-old says that the ambition will always be “to control” matches. “I can’t guarantee that in every game that will work but no matter who we are playing, home or away, it will be about trying to establish control.”

Ultimately, he says, “I would like schoolboy teams and academy teams throughout the country to look at the senior international team and think: ‘that’s how we want to play’. That they connect with it at that level. That is my dream.”

Speaking from his Dundalk home in an online press conference, Kenny acknowledged the achievements of those who have done the job in the past but suggested the building blocks required are there to construct a better, brighter future.

He was upbeat about the quality of the players he is inheriting and particularly positive about the defensive talent but September, he acknowledged, will amount to a fresh start as he tries to refashion a team long criticised for failing to amount to the sum of its parts.

“You have to respect the players who played in the campaign, but we only won one of the six games in the group, if you take the Gibraltar games out,” he says. “I’ll do things my own way. Put it that way.”

He seemed quite taken with the idea that people will be expecting change on a scale approaching revolution, but made it abundantly clear that he still sees key roles for many of the current players. Séamus Coleman will continue as captain while Darren Randolph and defenders like Matt Doherty and, in particular, John Egan were among those to get very positive mentions.

“I was speaking to some of our analysts and we got the printout of all the back fours from the top 20 (teams) in the last day or two. We went through it at length and I have the document. I looked at the back four against Denmark: Doherty, Egan, Duffy and Stevens and in my informed view that is in the top 10 of back fours in Europe. That’s what I feel.

“Darren Randolph has been very consistent in goal since Martin O’Neill gave him his debut,” he continued. “He’s been very, very consistent and makes good decisions. He’s been a very good goalkeeper for Ireland and that back four gives you a platform. . . once you have that you can focus on getting the rest right: trying to create more control in the games and more goal scoring opportunities.”

When then asked about all of the young strikers who have starred in his Under-21 side, he expressed the hope that they can establish themselves in the senior ranks but was quick to acknowledge the importance of David McGoldrick.

He seems set to have some tough decisions to make; he hopes so anyway and insists he will be happy to make them, but his wider success will also depend on his ability to transform the team’s approach in the very limited times he has his players on the training ground. The importance of getting that preparation right was, he suggests, a key reason for asking Keith Andrews and Damien Duff to join his management team ahead of Robbie Keane.

“I have huge respect for Robbie Keane as a player. . . but I have learned as a manager what works for me and what doesn’t work for me. You learn through your experiences and you must have the ability to pick your own backroom team, for one.”

He spoke at length about what he feels Andrews, Duff and also Alan Kelly will bring to the set up and the well defined roles he envisages for them.

Though the team’s next games are currently scheduled to be five months away, there will be little time together to get things right, but Kenny is confident that he, his coaching staff and the squad can hit the ground running.

“Going to Slovakia (most likely in October) and winning then trying to win a final away from home (the following month) is tough based on recent away results over a long period; it’s a tough ask - but it’s certainly not beyond us and I’m not thinking it’s beyond us. We have to be optimistic. We have to view it as an opportunity.

“What I am looking at is that if we got to the European Championships that we would have 13 competitive games and possibly three or four friendlies between September and June. That would be 16 or 17 games across three different competitions, World Cup qualifiers, Nations League and European Championships, which has never happened.

Changing the perception of the Irish football DNA: “I’m not going to sit here and criticise anyone, particularly the previous managers. I just didn’t like that people had that opinion that it was in our DNA to play long ball and that our players had the characteristics over the generations to play in a more direct way. I disagreed with that fundamentally and I still continue to disagree with it. But you have to try and prove it otherwise.”

Achieving his own ambition: “This is not a stepping stone or platform for me to go elsewhere. This is it for me. This is the ultimate job. The Irish international job is the ultimate honour and for me to get a longer contract, I have to earn it which is down to the performance of the team and the way that we play.”

Building from the back: “The fact you have such a well balanced back four, two fullbacks who can raid no matter who you pick, and dominant centre backs. . . and Egan transforms the way we play. The type of player he is, he gives us another dimension in how we defend and more importantly how we open up the pitch. That is a big plus for us.”

Keeping Coleman as captain: “I rang Seamus, as captain, just to reassure him that he will indeed be the captain of Ireland under my tenure as well. He will continue to be captain of Ireland. The reason being that every value he has as a man and a player, the way he prepares and applies himself, I admire. He’s a great ambassador. But ambassador is one thing. I just think his preparation, how he carries himself. His overall commitment to Irish football makes him an absolute stand-out captain for us, that’s how I view it.”

The sacrifices his family have had to make as he made his managerial journey: “Siobhan, my wife and children... the four of them. Some of my children have moved school three times; Niamh, my eldest has moved five times, three different jurisdictions - in the North, in Scotland... that’s been a big commitment for all of them, a massive commitment from all of them. Moving schools is a big ordeal. I wouldn’t be where I am today as manager without their support so I am grateful for that.”

Producing a side that inspires: “I would like schoolboy teams and academy teams throughout the country to look at the senior international team and think: ‘that’s how we want to play’. That they connect with it at that level. That is my dream.”