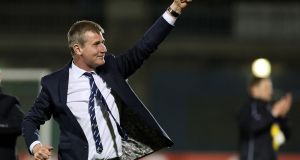 New Ireland manager Stephen Kenny has set out his ambitions after taking over from Mick McCarthy. Photograph: Paul Faith/AFP via Getty Images

Stephen Kenny says that his ambitions for his time in charge of the Irish team do not stretch much beyond qualifying for the European Championships as things stand. He does hope to be in the job longer than the initial two years he has on his contract but he accepts that his fortunes are closely tied to those of the side and, he insists, the way it plays.

“What I am looking at is that if we got to the European Championships that we would have 13 competitive games and possibly three or four friendlies between September and June,” he said. “That would be 16 or 17 games across three different competitions, World Cup qualifiers, Nations League and European Championships, which has never happened.

His emphasis on playing the game the “right way” has been an important element of his club career and won him a great many admirers, particularly around the League of Ireland. Kenny insists that maintaining that will be one of his aims but, he admits, achieving success will be a very central element too.

“It’s a short life and I’ve only got one chance, one opportunity here,” he said. “I will ensure that I have conviction in the way I set the team up. The ambition will be that we will dominate possession in a lot of the games.

“I can’t promise that we will always achieve that but I want people to come to the Aviva Stadium and look forward to watching this team. And ideally I would want every schoolboy team looking at the international team and thinking: ‘that’s how we want to play’. That’s what I would want.

Kenny would like the opportunity to manage the team beyond the World Cup 2022 campaign, but said: “I feel that I have to earn it. I’ve been appointed manager for a specific period and how the team performs will decide whether that is extended.

“This is not a stepping stone or platform for me to go elsewhere. This is it for me. This is the ultimate job. The Irish international job is the ultimate honour and for me to get a longer contract, I have to earn it which is down to the performance of the team and the way that we play.

“The majority of the Irish sporting public love football,” he continued, “and they want to see an exciting Irish team. They want the team to do well and I hope that they can really connect with the team over the next year so I’ve got to make sure the team plays well first and foremost and the rest will hopefully follow.”

Kenny said that he has spoken to just one player, Séamus Coleman, so far but that he asked the Ireland skipper to tell the others that he will be in touch in due course. He said he regretted that he had not been able to speak with Robbie Keane before it was officially announced that the former striker would not be part of his coaching team.

“I have the height of respect for Robbie,” he said. “What he has achieved in his career has been incredible. I don’t know him well but when we met we got on really well. But as a manager you want to be able to pick your own backroom staff.”